Probability density function (PDF) is the probability distribution for continuous variables using lower case notation . For example, the probability of completing a task between and seconds. Sum of all possibilities is equal to 1.

is called a random variable whose values are the outcome of a random process, like rolling a dice five times. For example, holds the probability for after five rolls.

or for continuous variables

Given 2 events are independent: 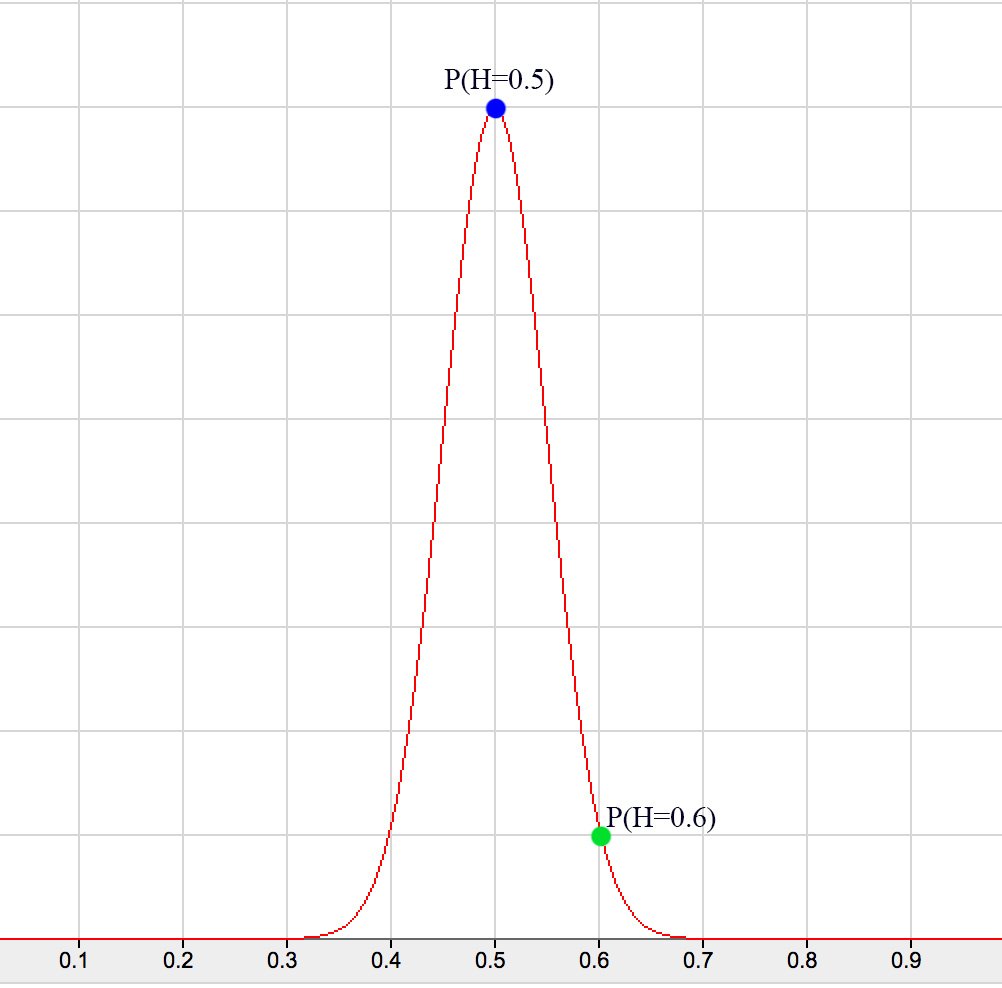 For example, means what is the probability of finding the coin has a 0.6 chance of getting a tail. Of course, it is much lower than if the coin is fair. We can use previous knowledge (including previous data) or assumption to define the prior at the beginning and re-adjust it with Bayes’ theorem with observed evidence. is the likelihood of the observed data given the belief. (say, the likelihood of observing 2 tails in the next 2 trails) For example, if , the likelihood of seeing 2 tails are . The posterior is the updated belief using Bayes’ equation above after taking the observed data into account. Since we see more tails in our evidence, the peak of the posterior is shifted to the right but not to as the frequentist approach may calculate. As suspected, we are dealing with a series of probabilities rather than one single value. However, with the beta function, this can be done easily.

When the next round of sample data is available, we can apply the Bayes’ theorem again with the prior replaced by the last posterior. Bayes’ theorem works better than simple frequency calculation in particular the sampling error can be high when sampling size is small at the beginning.

Bayes theorem can handle multiple variables and provide a better mathematical foundations than the frequentist approach.This section introduces the key terminology. In the later section on beta function, we will detail the implementation and the advantage.

We often ignore the marginal property (the denominator) in Naive Bayes theorem because it is a constant. The probability of the evidence is un-related with . We usually compare calculated values rather than finding the absolute values. In particular, may be too hard to find in some problems.

In detecting e-mail spam, indicates whether the email is a spam. represents the presence of the word in our vocabulary. represents the chance that word presence in a spam. We can collect the spam emails marked by users and calculate this probability easily. By trial and error, we can set a threshold for the calculated value before we mark it as a spam.

The definition of expectation for discret variables:

Can be shorten as:

The PDF of a multivariate Gaussian distribution is defined as: 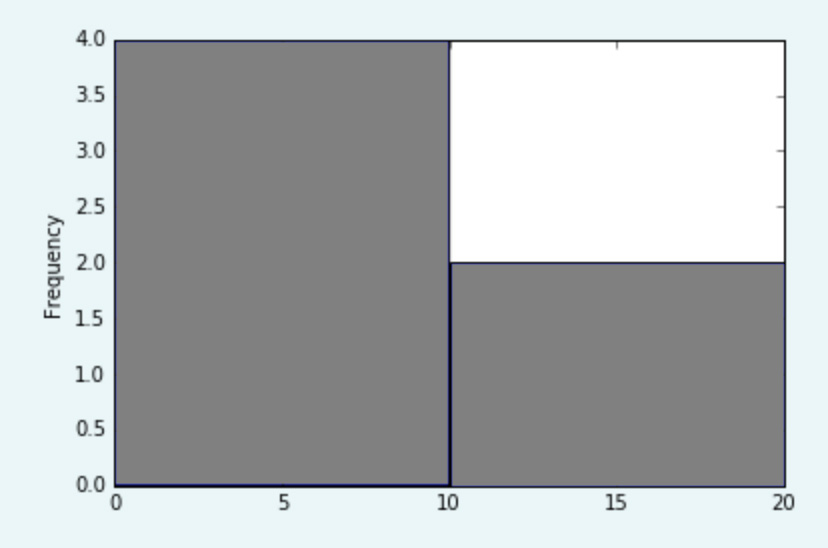 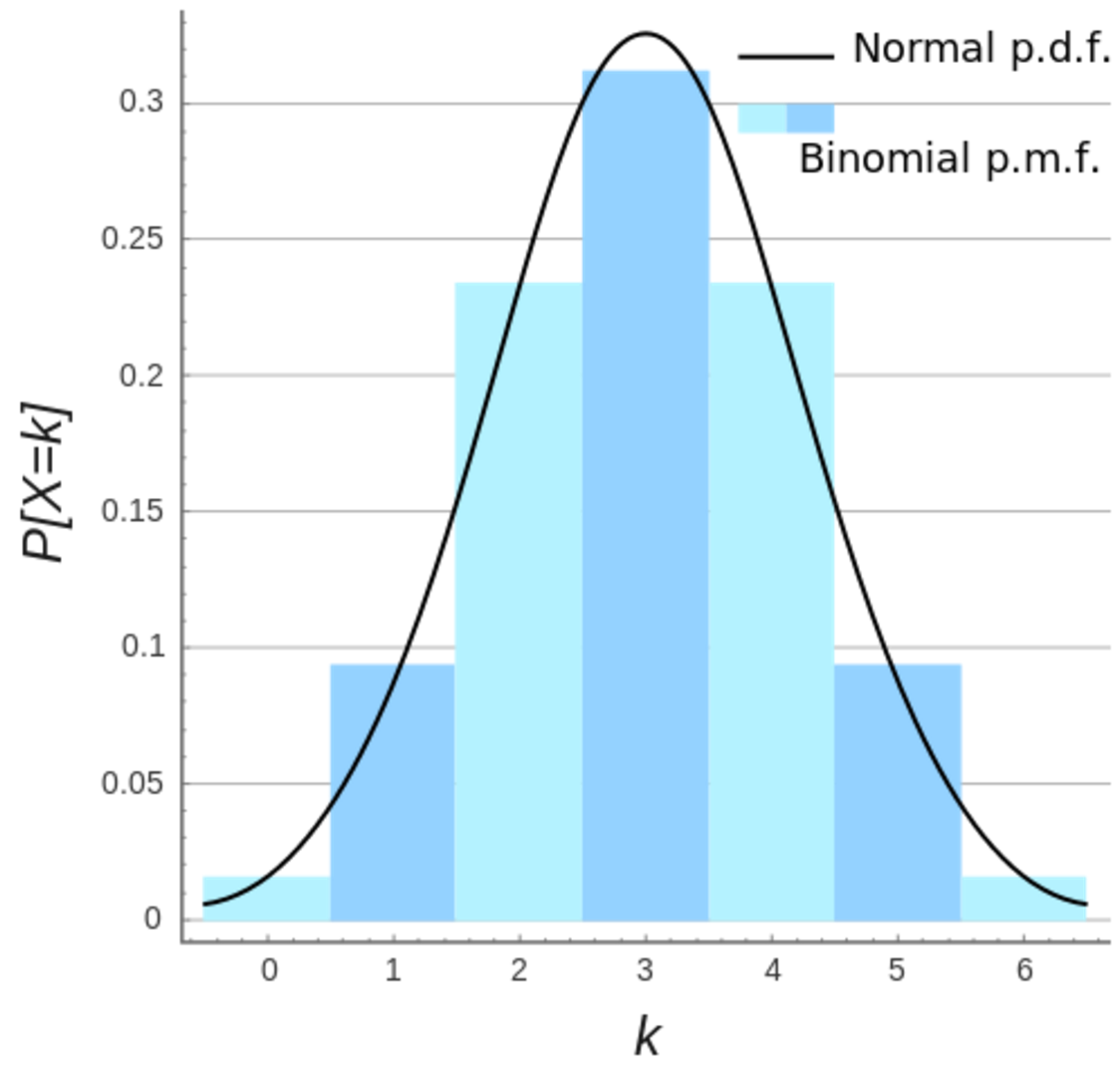 Assuming a rare event with an event rate , the probability of observing x events within an interval is:

Example: If there were 2 earthquakes per 10 years, what is the chance of having 3 earth quakes in 20 years.

The definition of a beta distribution is:

where and are parameters for the beta distribution.

For discret variable, the beta function is defined as:

For continuos variable, the beta function is:

An uniform distribution maximizes the entropy (randomness) to reflect the highest uncertainty of our belief.

We use Beta function to model our belief. We set in the beta distribution for an uniform probability distribution. The following plots the distribution : 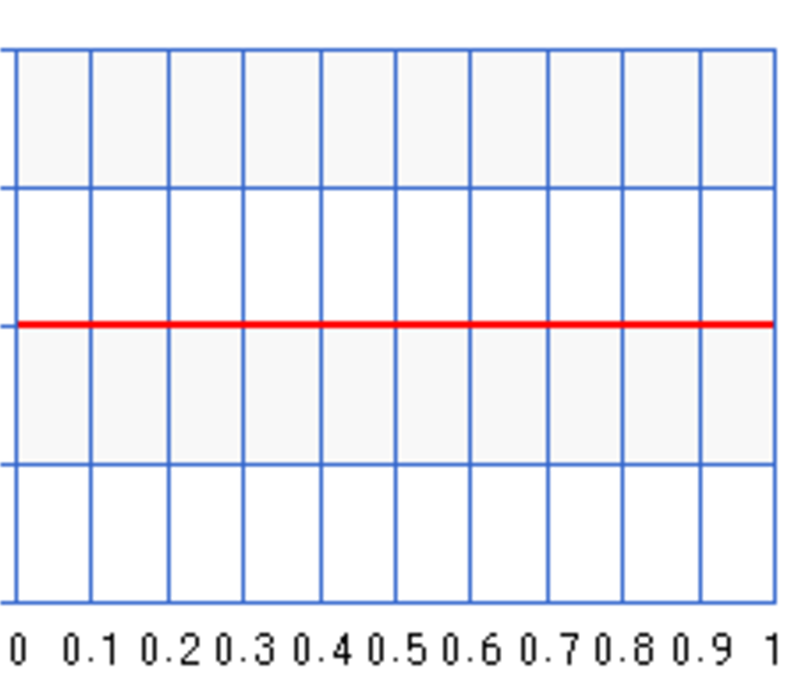 Different values of and result in different probability distribution. For , the probability peaks towards : 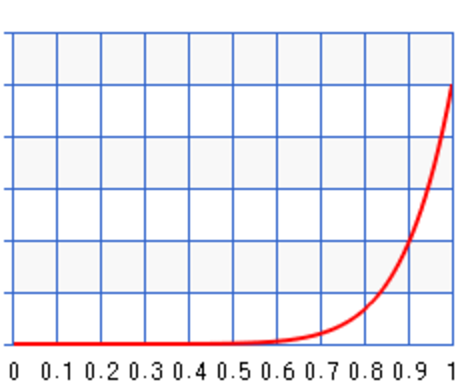 For , the probability peaks towards : 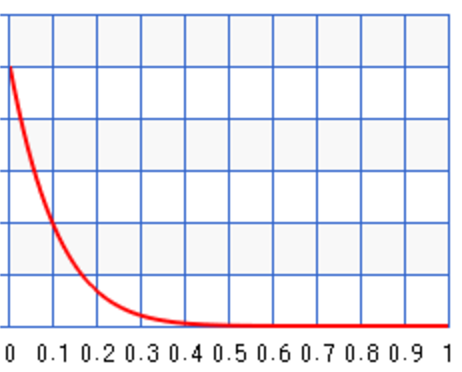 For example, we can start with some prior information about the infection rate of the flu. For example, for , we set the peak around 0.35: 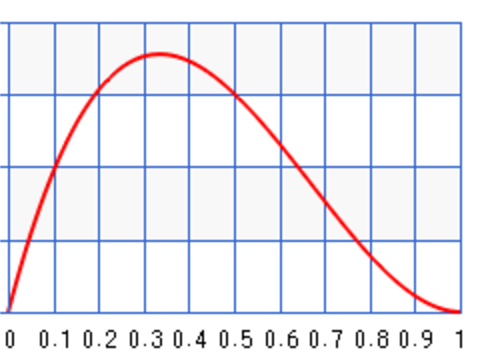 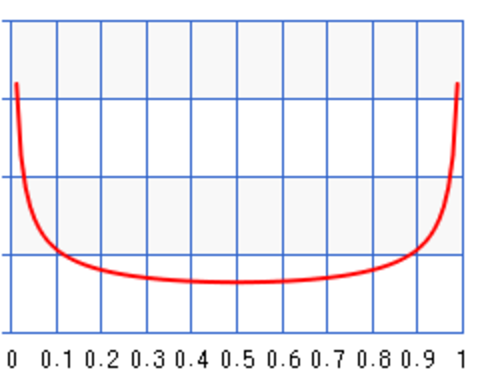 We model the likeliness of our observed data given a specific infection rate with a Binomial distribution. For example, what is the possibility of seeing 4 infections (variable x) out of 10 (N) samples given the infection rate .

Let’s apply the Bayes theorem to calculate the posterior : the probability distribution function for given the observed data. We usually remove constant terms from the equations because we can always re-normalize the graph later if needed.

We start with the uniformed distributed prior assuming we have no prior knowledge on the infection rate. is equally likely for any values between [0, 1].

For the first set of sample, we have 3 infections our of a sample of 10. () The posterior will be which has a peak at 0.3. Even assuming no prior knowledge (an uniform distribution), Bayes’ theorem arrives with a posterior peaks at the maximum likeliness estimation (0.3) from the first sample data. 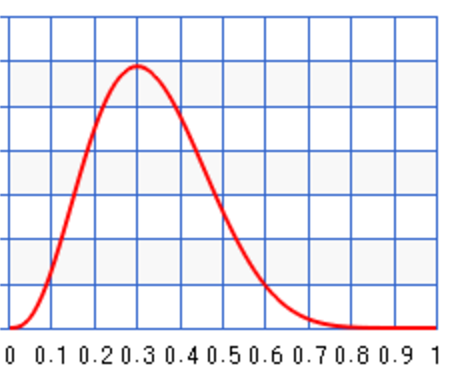 Just for discussion, we can start with a biased prior which peak at 100% infection:

The observed sample () will produce the posterior: 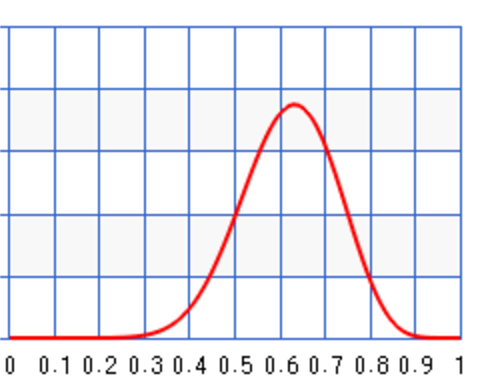 Let’s say a second set of samples came in 1 week later with . We can update the posterior again.

As shown, the posterior’s peak moves closer to the maximum likeliness to correct the previous bias. 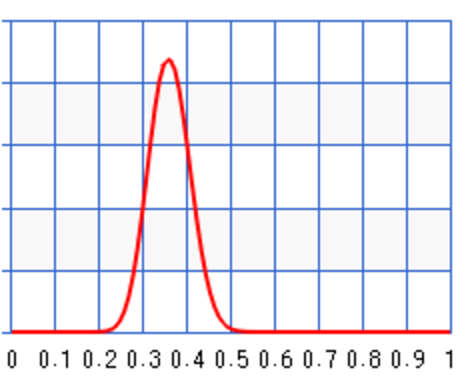 When we enter a new flu season, our new sampling size for the new Flu strain is small. The sampling error can be large if we just use this small sampling data to compute the infection rate. Instead, we use prior knowledge (the last 12 months data) to compute a prior for the infection rate. Then we use Bayes theorem with the prior and the likeliness to compute the posterior probability. When data size is small, the posterior rely more on the prior but once the sampling size increases, it re-adjusts itself to the new sample data. Hence, Bayes theorem can give better prediction. 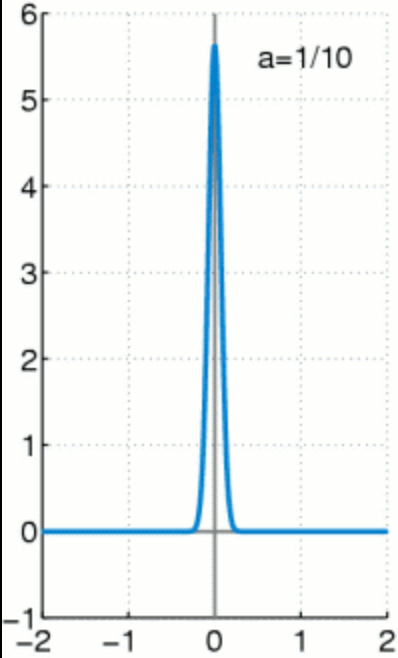 Both exponential and Laplace distribution have a sharp point at 0 which is sometimes used for machine learning. 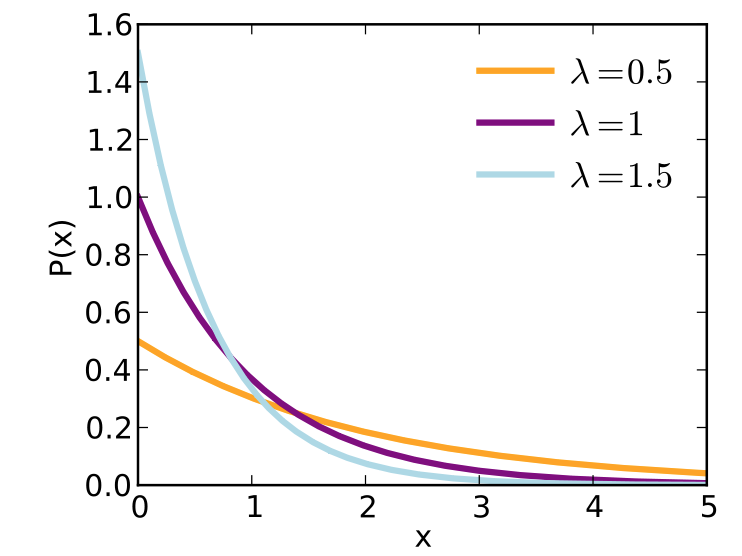 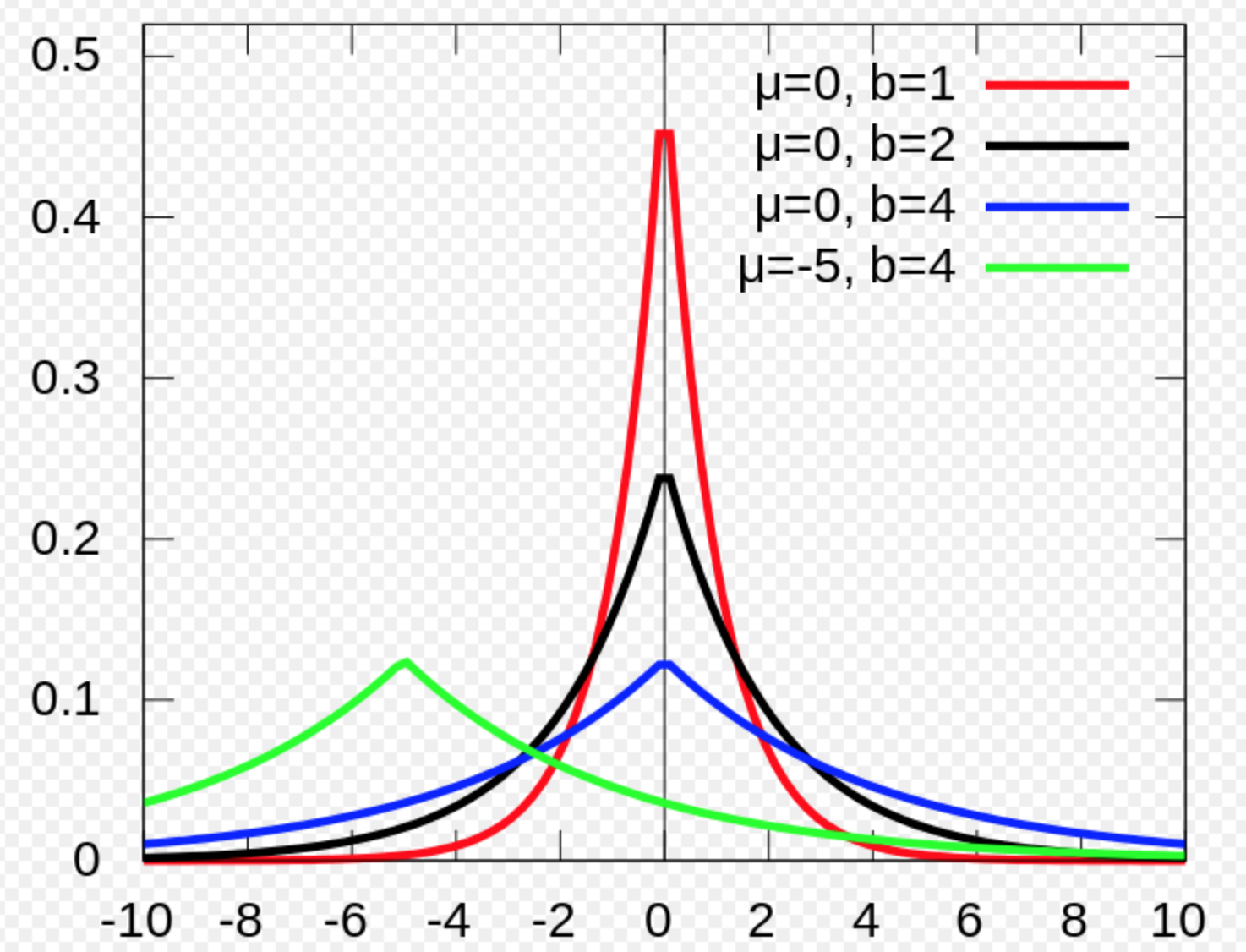 Calculate bias and variances of a Gaussian distribution estimator

A common estimator for the Gaussian mean parameter by sampling datapoints:

Estimate the Bias of the estimator:

Hence, our estimator for the Gaussian mean parameter has zero bias.

Let’s consider the following estimator for the Gaussian variance parameter:

Estimate the Bias of the estimator:

Calculate bias and variances of a Bernoulli Distribution estimator

A common estimator will be:

i.e. our estimator has no bias.

The variance of drops as increases: