In a previous article on style transfer, we demonstrate how to generate images based on a discriminative model. Basically, we select a specific layer in a CNN, manipulate the gradient manually and backpropagate the gradient to change the image. For example, we want to change an image to make it look similar to another image. We pass the first and the second image to the CNN respectively. We extract the corresponding features of those image at some layers deep down in the network. We manually set the gradient to the difference of the feature values of the images. Then we backpropagate the gradient to make one image look closer to another one.

We turn around a CNN network to generate realistic images through backpropagation by exaggerate certain features.

Discriminative models starts with an image and draw conclusion on something we observe:

In previous articles, we train a CNN to extract features of our training dataset. Then we start with a noisy image and use backpropagation to make content and style transfer back to the image.

Often, we do not know the semantic meaning of the latent variables. i.e. One may generate a room with a windo we do not know what the room may look like by just looking at . In the picture above, we randomly sample 2 different , say from a uniform distribution or a Gaussian distribution, and 2 different rooms are generated from the generative deep network. As we gradually change , the room is also gradually changed.

We often compare these GAN networks as a counterfeiter (generator) and a bank (discriminator). Currency are labeled as real or counterfeit to train the bank in identifying fake money. However, the same training signal for the bank is repurposed for training the counterfeiter to print better counterfeit. If done correctly, we can lock both parties into competition that eventually the counterfeit is undistinguishable from real money.

Given a generator network parameterized by and a latent variable , an image is generated as: 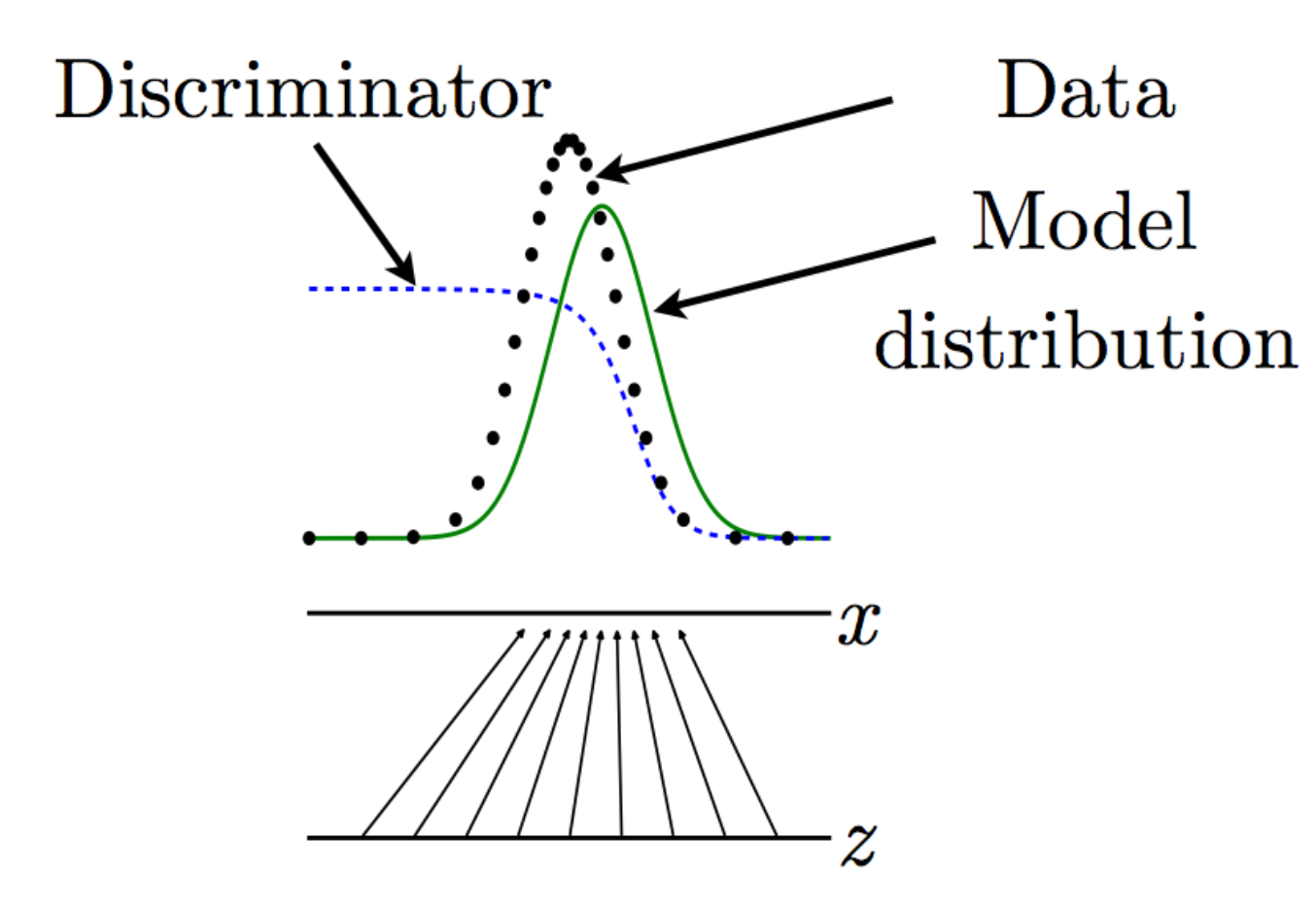 GAN is a MiniMax game. The generator maximizes the log-probability of labeling real and fake images correctly while the generator minimizes it.

As a zero-sum game, the generator use the negative as the cost function. Nevertheless, if the discriminator becomes too accurate, and therefore the gradient of the generator vanish which make training hard for the generator.

To resolve that, we can replace the cost function for the generator with:

We may treat GAN as a maximum likelihood game.

This is equivalent to minimizing:

Here is the comparison between 3 different cost function:

The value function is defined as:

Apply gradient descent, the change in parameter at each time step is

The solution will be:

In DCGAN, we generate an image directly using a deep network while using a second discriminator network to guide the generation process. Here is the generator network:

The following are some room pictures generated by DCGAN: 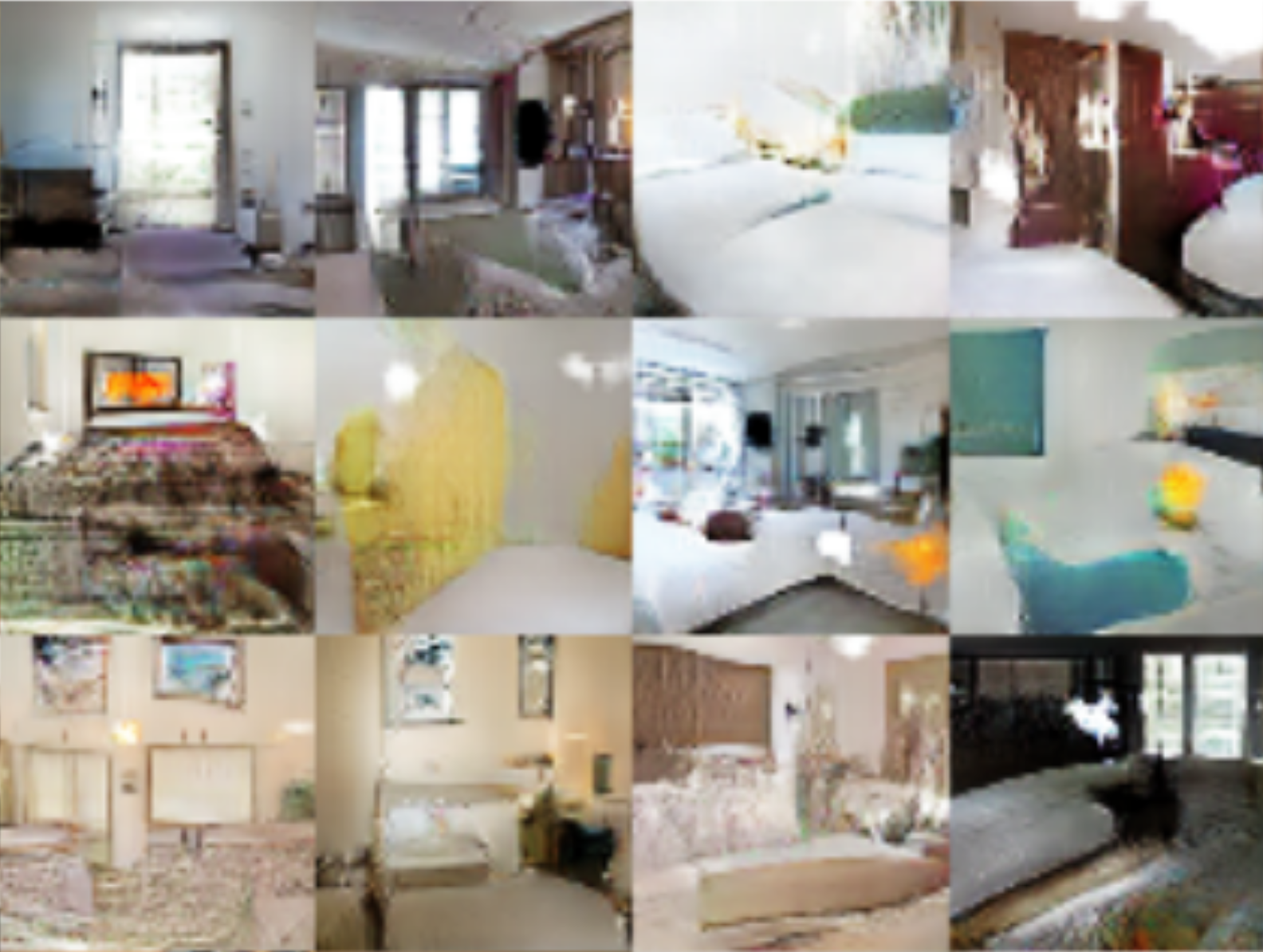 As we change gradually, the images will be changed gradually also. 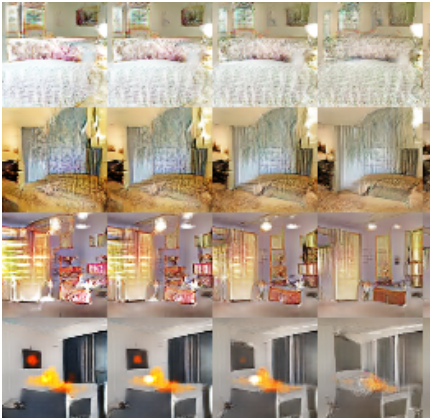 The following code is written in TensorFlow.

Here is a discriminator network that looks similar to the usual CNN classification network. It compose of 4 convolution layers. With the exception of the first convolution layer, other convolution layers are linked with a batch normalization layer and then a leaky ReLU. Finally, it is connected to a fully connected layer (linear) with a sigmoid classifier.

We computed the lost function for the discriminator using the cross entropy for both real and generated images.

We compute the lost function for the generator by using the logits of the generated images from the discriminator. Then, we backpropagate the gradient to train the such that it can later create more realistic images.

We use 2 separate optimizer to train both network simultaneously:

The new cost function for the generator is:

The discriminator processes each datapoint independently and there is no mechanism to encourage the generator to create more diversify images (the generator may collapse to very similar output). In minibatch discrimination, we add information about its co-relationship with other images as input to the discriminator.

be the feature vector of datapoint in the intermediate layer of the discriminator. is another tensor to train.

We use the following as the input to the next immediate layer:

We add the following to each player cost which is the parameter at time .

The added cost help the gradient descent to find the equilibria of some low-dimensional, continuous non-convex games.

Sometimes the gradient for the generator can become very large if the discriminator becomes too confident. Adversary networks are vulnerable for such highly confident outputs even the classification is right. One-sided label smoothing regulates the discriminator not to be over confidence. It replaces the 1 targets for a classifier with smoothed values, like 0.9.

Batch normalization subtracts the mean and dividing by the standard deviation of a feature on a minibatch of data. If the sample batch is small, it generates un-expected side effects to the generated images. For example, if one batch of training data has green-tinted while another batch of training data has yellow-tinted area. We see the generator starts create image with both yellow and green-tinted area.

VBN is expensive and will be used only in the generator network.

In the MNIST dataset, it will be nice to have a latent variable representing the class of the digit (0-9). Even better, we can have another variable for the digit’s angle and one for the stroke thickness. In GAN, the input of the encoder and the decoder are:

In CGAN, we explicitly define (the class, the digit’s angle, stroke thickness etc …) as an additional input to the encoder and the decoder

Define the placeholder for and . We explicitly use a 1-hot vector of the label (0-9) as y.

Create the generator and discriminator TensorFlow operations. and .

The code for the generator:

The code for the discriminator:

Cost function for the discriminator and the generator:

Create the optimizer for the discriminator and the generator:

Reading and and sampling for execution:

Generate samples from our learned model:

Here is the model generated “7”: 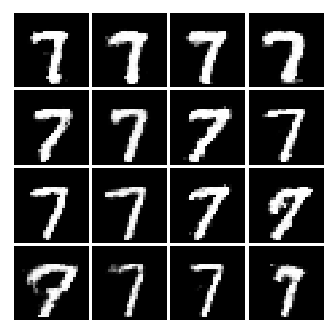 The full source code is in here which is modified from wiseodd.

In CGAN’s MNIST, we read the labels of the images and explicitly pass it into the generator and discriminator as .

In InfoGAN, the generator and the discriminator are:

which is the latent code representing the semantic features of the datapoints and the noise vector is the source of noise for the latent variables similar to CGAN. In InfoGAN, will be learned from in a deep net instead of initialized it explicitly with labels in CGAN.

Creating a generator and a discriminator

Unlike CGAN, is learned from a deep net instead of explicitly define it.

One naive approach is to create a new deep net to approximate given .

Creating the generator and discriminator:

The loss function for Q is defined as:

The full source code is in here which is modified from wiseodd.

In information theory, the mutual information between and is . It measures how much we will know if we know or vice versa. If and are independent,

which is the entropy.

Given , we want to have a small entropy. InfoGAN want to solve the minmax of

To compute , we need to approximate with a function (Variation Maximization)

To find the lower bound of :

which is a function approximator for . InfoGan minmax the following equation:

In InfoGAN, we do not create a separate net. Instead, and share all CNN layers in the discriminator but with one fully connected layer dedicated to output from . For latent code , it applies softmax to represent . For continuous latent code , InfoGAN treats it as a Gaussian distribution. Maximize equivalent to maximizing the mutual information and minimize the function approximator error. 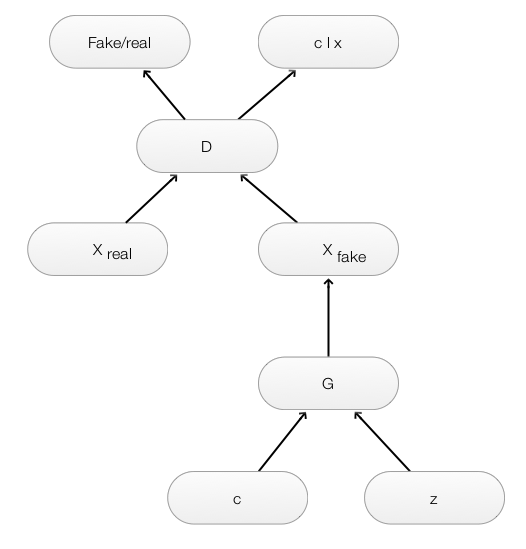 The generator takes in and (compose of 1-hot vector for 10 label) as input to generate a 28x28 image.

Building on top of the discriminator

Full code for the discriminator and Q:

The full source code is in here which is modified from Kim.

can be categorical or continuous. To compute the loss for when is continuous.

Mode collapse is when the generator maps several different input z values to the same output. Rather than converging to a distribution containing all of the modes in a training set, the generator produces only one mode at a time even they can cycle through to each others.

It is possible that mode collapse is caused by performing the MaxMin instead of the MiniMax. MaxMin may map z to a single value x that the discriminator can not tell it is fake.

Information in this article is based on