Before going into the details of VAEs, we discuss the use of gaussian distribution for data modeling.

In the following diagram, we assume the probability of X equal to a certain value , , follows a gaussian distribution:

In the example above, mean: , standard deviation: :

In many real world examples, the data sample distribution follows a gaussian distribution.

Now, we generalize it with multiple variables. For example, we want to model the relationship between the body height and the body weight for San Francisco residents. We collect the information from 1000 adult residents and plot the data below with each red dot represents 1 person: 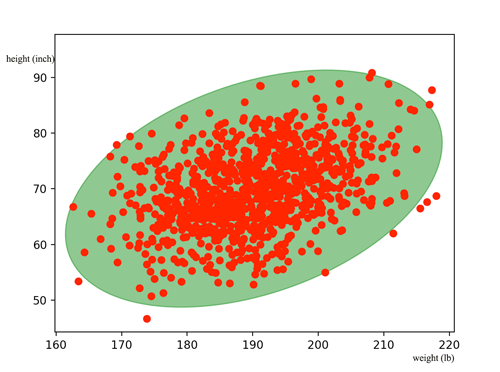 We can plot the corresponding probability density function 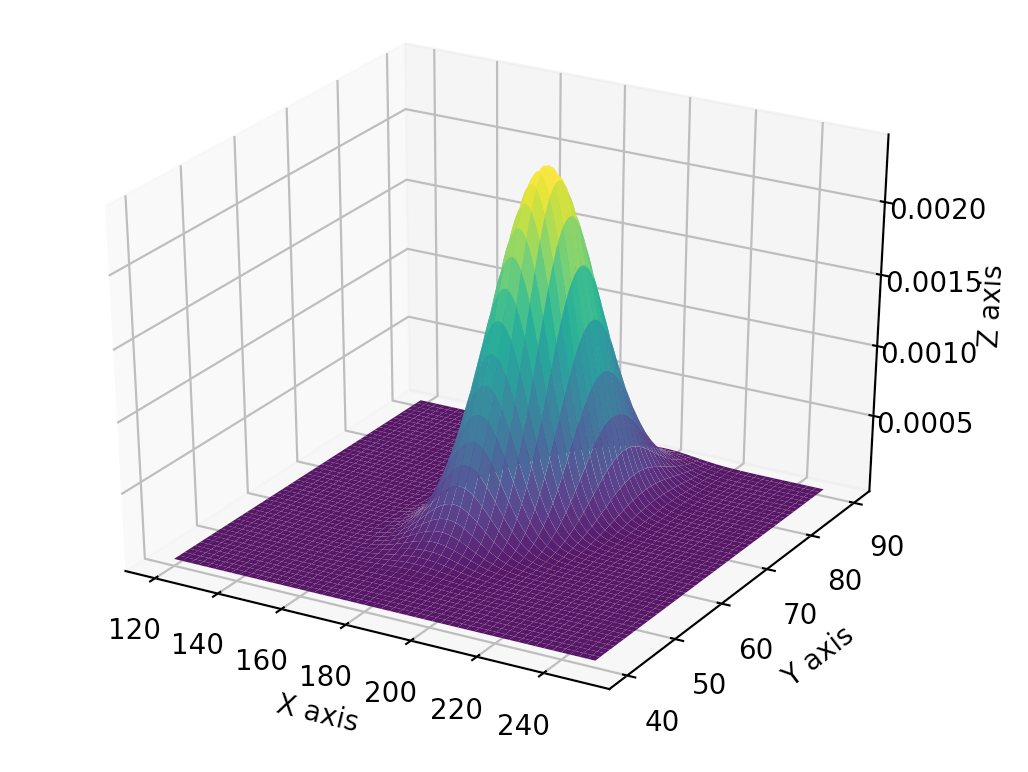 The PDF with p variables is:

The notation for sampling x is:

Let’s go back to our weight and height example to illustrate it.

From the data, we comput the mean weight is 190 lb and mean height is 70 inches:

For the covariance matrix , here, we illustrate how to compute one of the element

measures the co-relationship between variables and . Positive values means both are positively related. With not surprise, is positive because weight increases with height. If two variables are independent of each other, it should be 0 like:

and we will simplify the gaussian distribution notation here as:

In an autoencoders, we use a deep network to map the input image (for example 256x256 pixels = 256x256 = 65536 dimension) to a lower dimension latent variables (latent vector say 100-D vector: ). We use another deep network to decode the latent variables to restore the image. We train both encoder and decoder network to minimize the difference between the original image and the decoded image. By forcing the image to a lower dimension, we hope the network learns to encode the image by extracting core features.

For VAEs, we replace the middle part with a stochastic model using a gaussian distribution. Let’s get into an example to demonstrate the flow:

Say, the encoder generates and

We can sample a value from this distribution:

with the latent variables as (say) :

The autoencoder in the previous section is very hard to train with not much guarantee that the network is generalize enough to make good predictions.(We say the network simply memorize the training data.) In VAEs, we add a constrain to make sure:

The decoder feeds the 20 latent variables to a fully connected layer followed with 2 transpose convolution layer with ReLU. The output is then feed into a sigmoid layer to generate the image.

We use the encoder to encode the input image. Use sampling to generate from the mean and variance of the gaussian distribution and then decode it.

We use the adam optimizer to train both networks.

In VAE, we want to model the data distribution with an encoder , a decoder and a latent variable model through the VAE objective function:

To draw this conclusion, we start with the KL divergence which measures the difference of 2 distributions. By definition, KL divergence is defined as:

We call ELBO the evidence lower bound because:

Instead of the distribution , we can model the data with . With the error term, , we can establish a lower bound for which in practice is good enough in modeling the data distribution. In the VAE objective function, maximize our model probability is the same as maximize while minimize the divergence of .

Maximizing can be done by building a decoder network and maximize its likelihood. So with an encoder , a decoder , our objective become optimizing:

We can apply a constrain to such that we can evaluate easily. In AVE, we use . For optimal solution, we want to be as close as .

In VAE, we model as

Here is an exercise in computing the KL divergence of 2 simple gaussian distributions:

The full source code for the VAE is located here. Here is the digits created by a VAE. 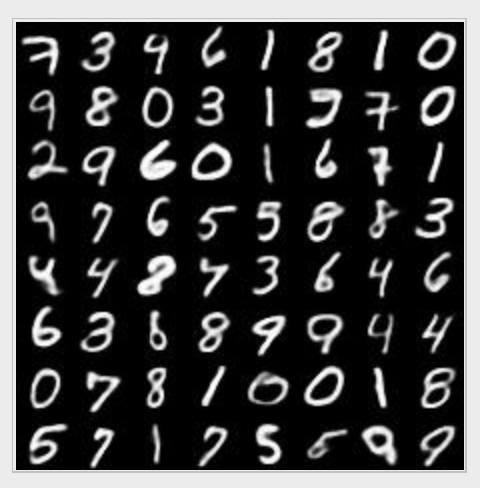