I am retiring this page now.

Detecting objects and their locations are critical for many Artificial Intelligence (AI) applications. For example, in autonomous driving, it is important to realize what objects are in front of us, as well as identifying traffic lights and road signs. The license plate reader in a police car alerts the authority of stolen cars by locating the license plates and applying visual recognition. The following picture illustrates some of the objects detected with the corresponding boundary box and estimated certainty. Object detection is about classifying objects and define a bounding box around them. 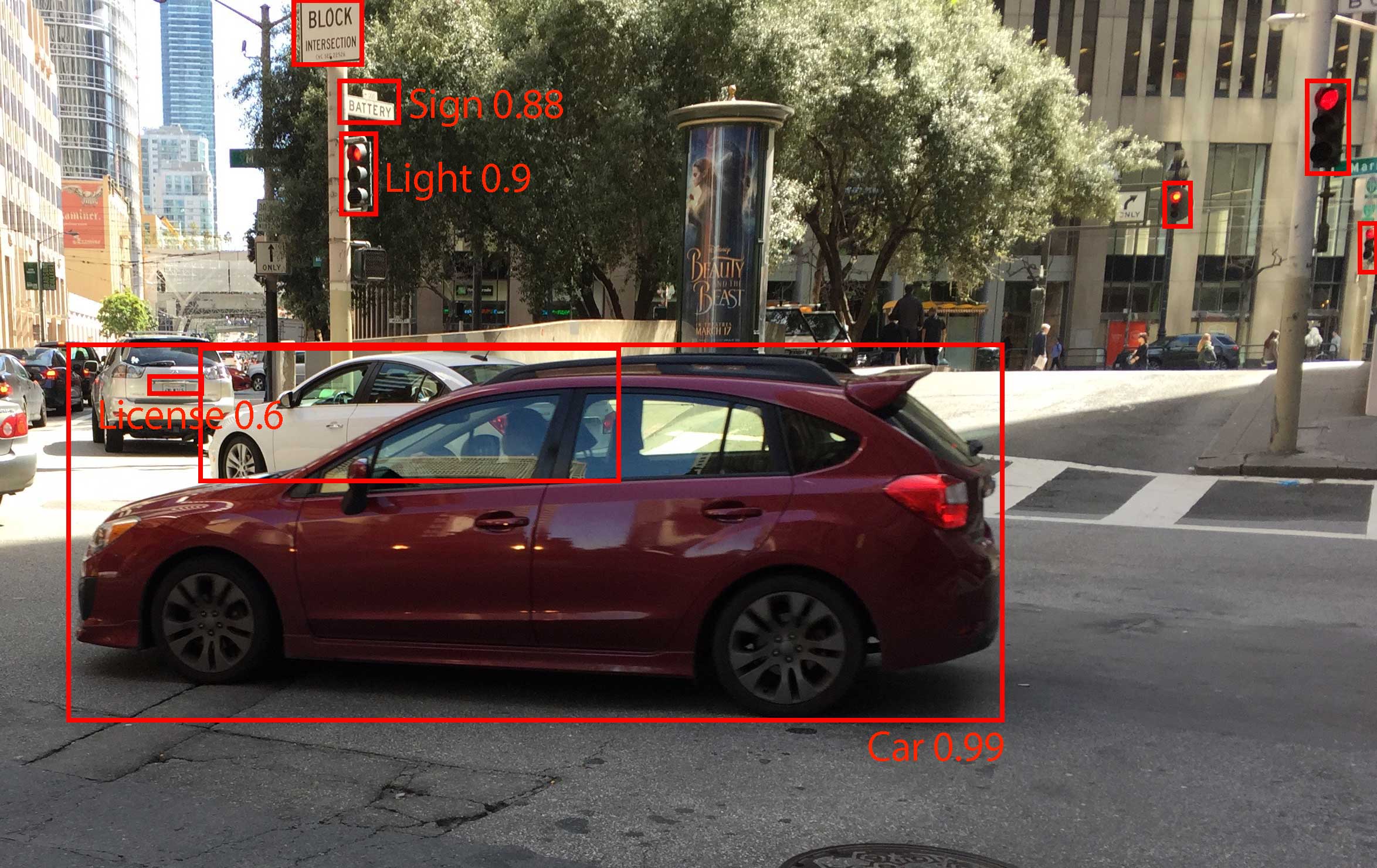 The information in R-CNN and the corresponding diagrams are based on the paper Rich feature hierarchies for accurate object detection and semantic segmentation, Ross Girshick et al.

With an image, we:

Use Selective search for region proposals

The information in selective search is based on the paper Segmentation as Selective Search for Object Recognition, van de Sande et al.

In selective search, we start with many tiny initial regions. We use a greedy algorithm to grow a region. First we locate two most similar regions and merge them together. Similarity \(S\) between region \(a\) and \(b\) is defined as:

where \(S_{texture}(a, b)\) measures the visual similarity, and \(S_{size}\) prefers merging smaller regions together to avoid a single region from gobbling up all others one by one.

We continue merging regions until everything is combined together. In the first row, we show how we grow the regions, and the blue rectangles in the second rows show all possible region proposals we made during the merging. The green rectangle are the target objects that we want to detect. 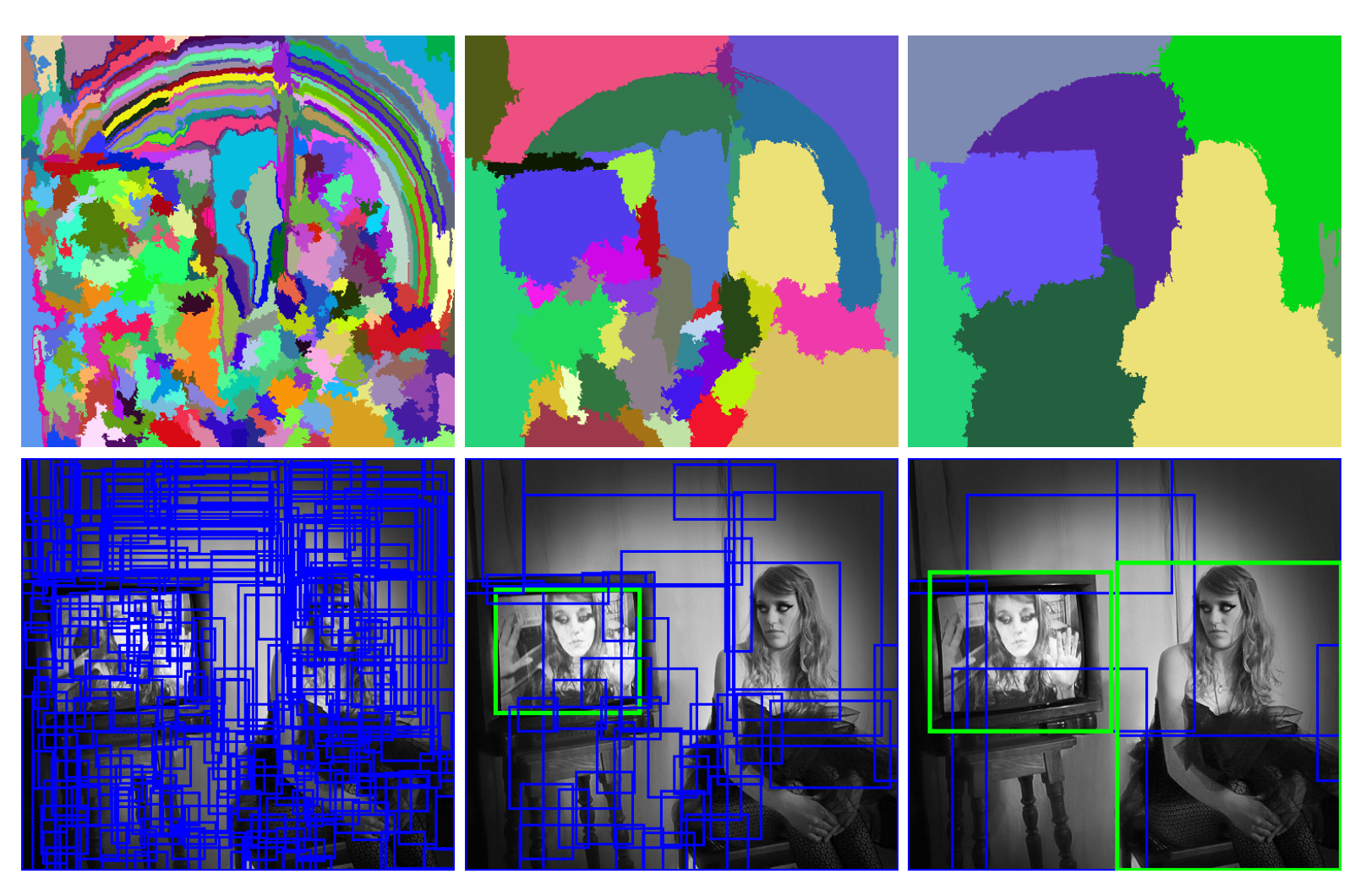 For every region proposal, we use a CNN to extract the features. Since a CNN takes a fixed-size image, we wrap a proposed region into a 227 x 227 RGB images. 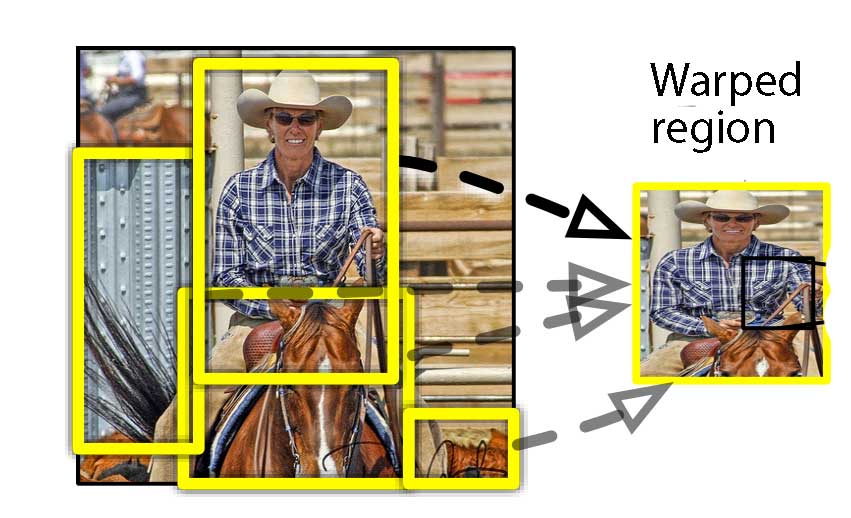 Extracting features with a CNN

This will then process by a CNN to extract a 4096-dimensional feature:

We then apply a SVM classifier to identify the object: 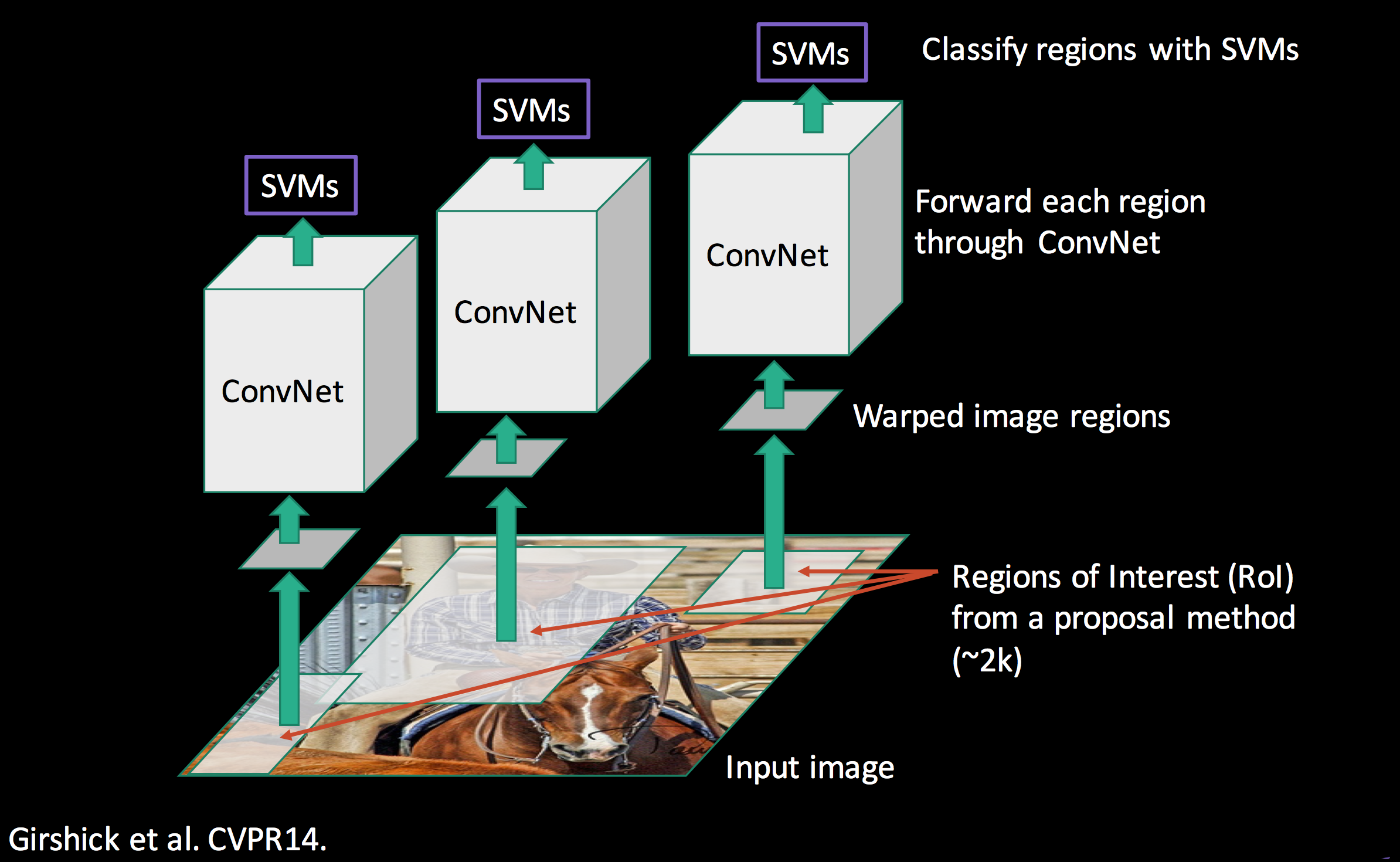 The original boundary box proposal may need further refinement. We apply a regressor to calculate the final red box from the initial blue proposal region. 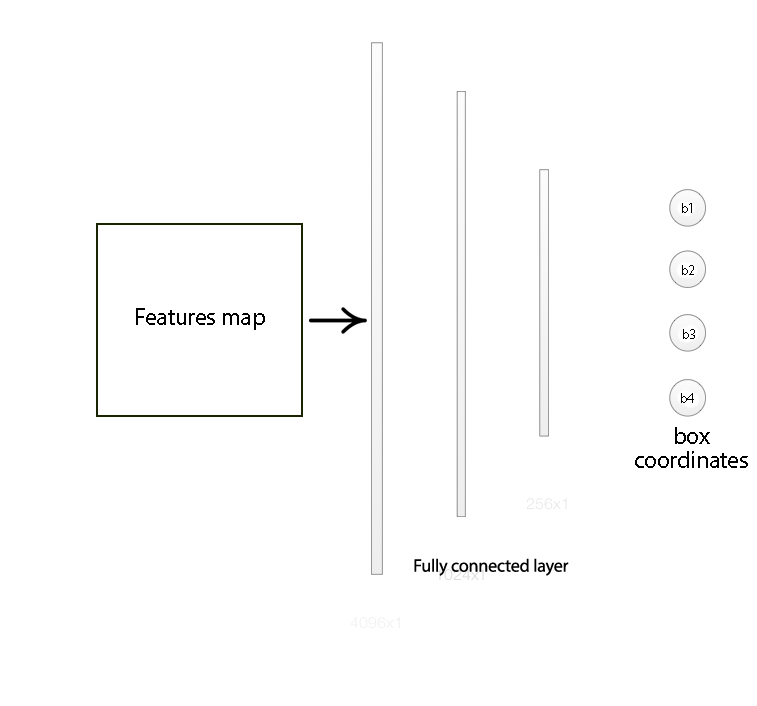 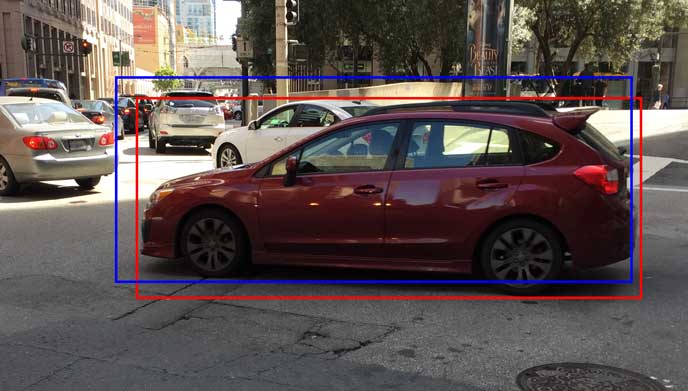 Here, the R-CNN classifies objects in a picture and produces the corresponding boundary box. 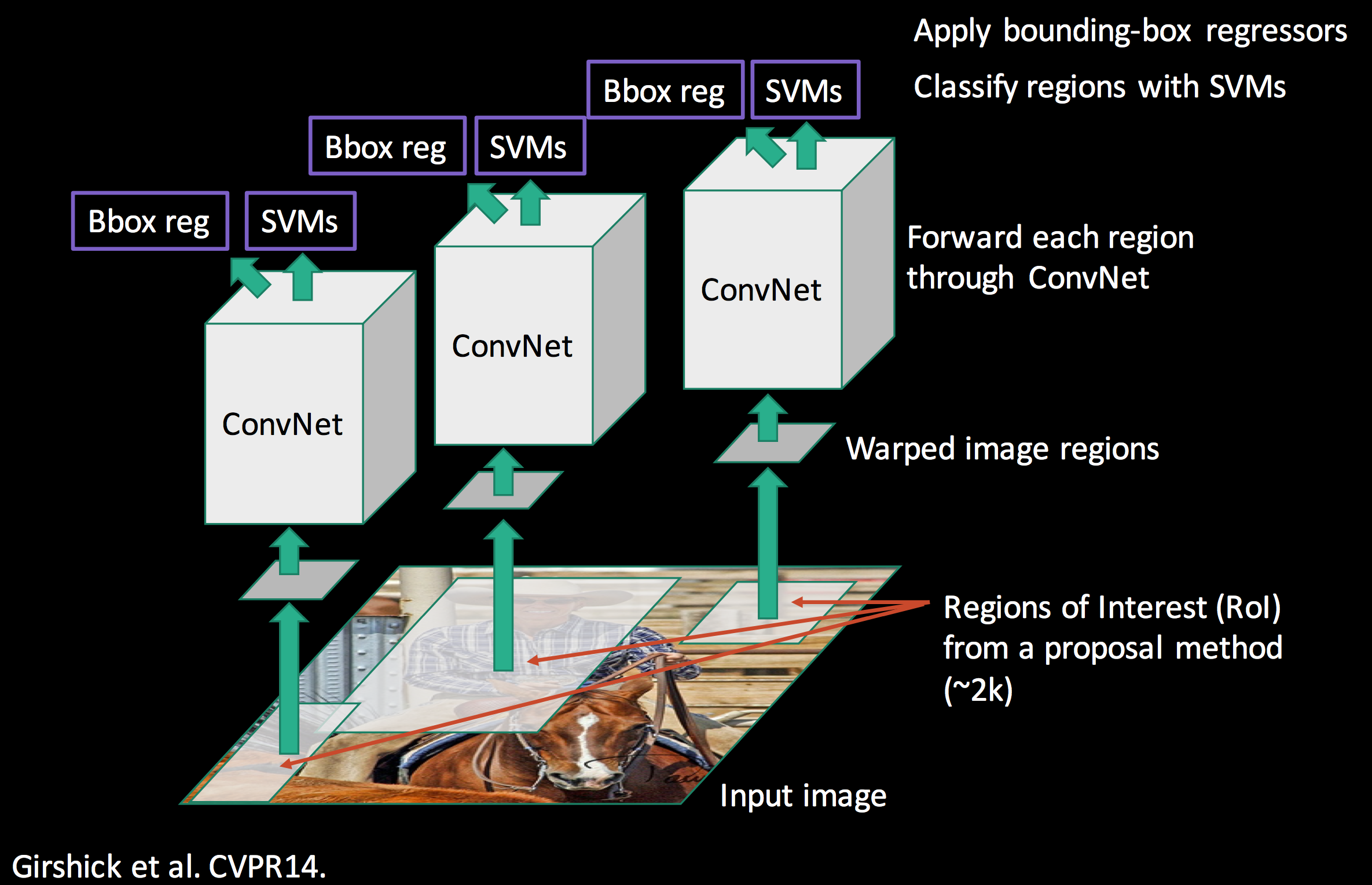 The information and diagrams in this section come from “Spatial Pyramid Pooling in Deep Convolutional Networks for Visual Recognition”, Kaiming He et al for SPPnet and “Fast CNN”, Ross Girshick (ICCV’15) for Fast R-CNN 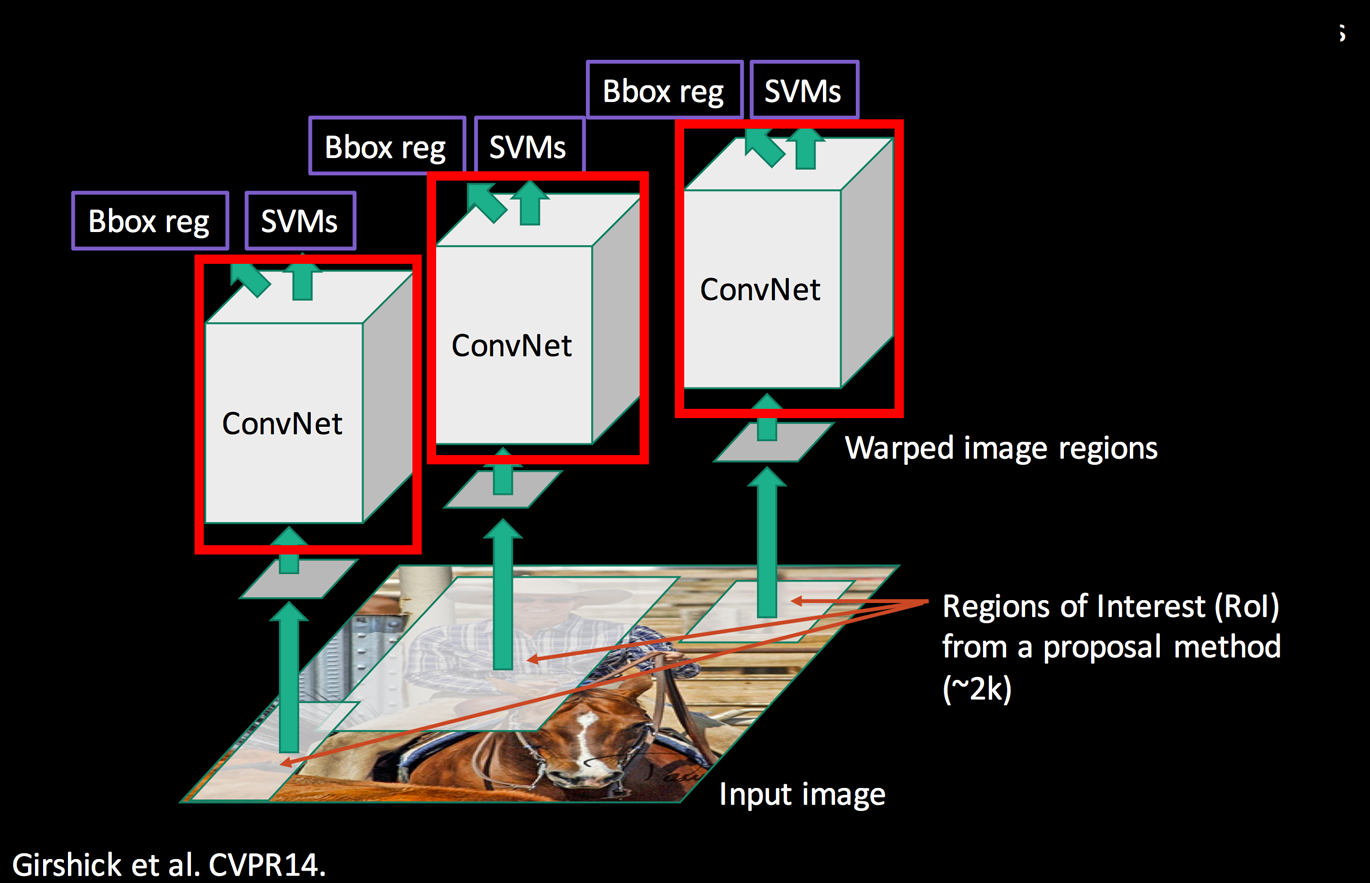 Hence, instead of converting 2,000 regions into the corresponding features maps, we convert the whole image once.

Here is the visualization of the features maps in a CNN. 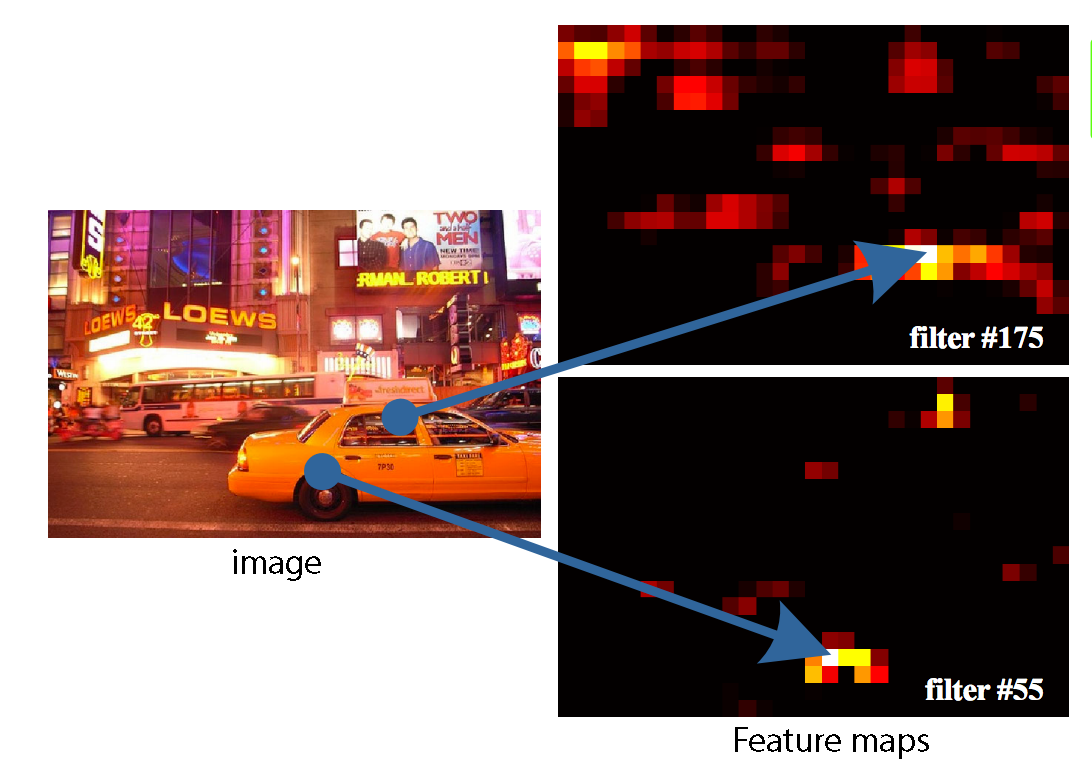 Both papers do not restrict themselves to any region proposal methods.

Each spatial pyramid layer is in a different scale, and we use maximum pooling to warp the original RoI to the target map on the right. 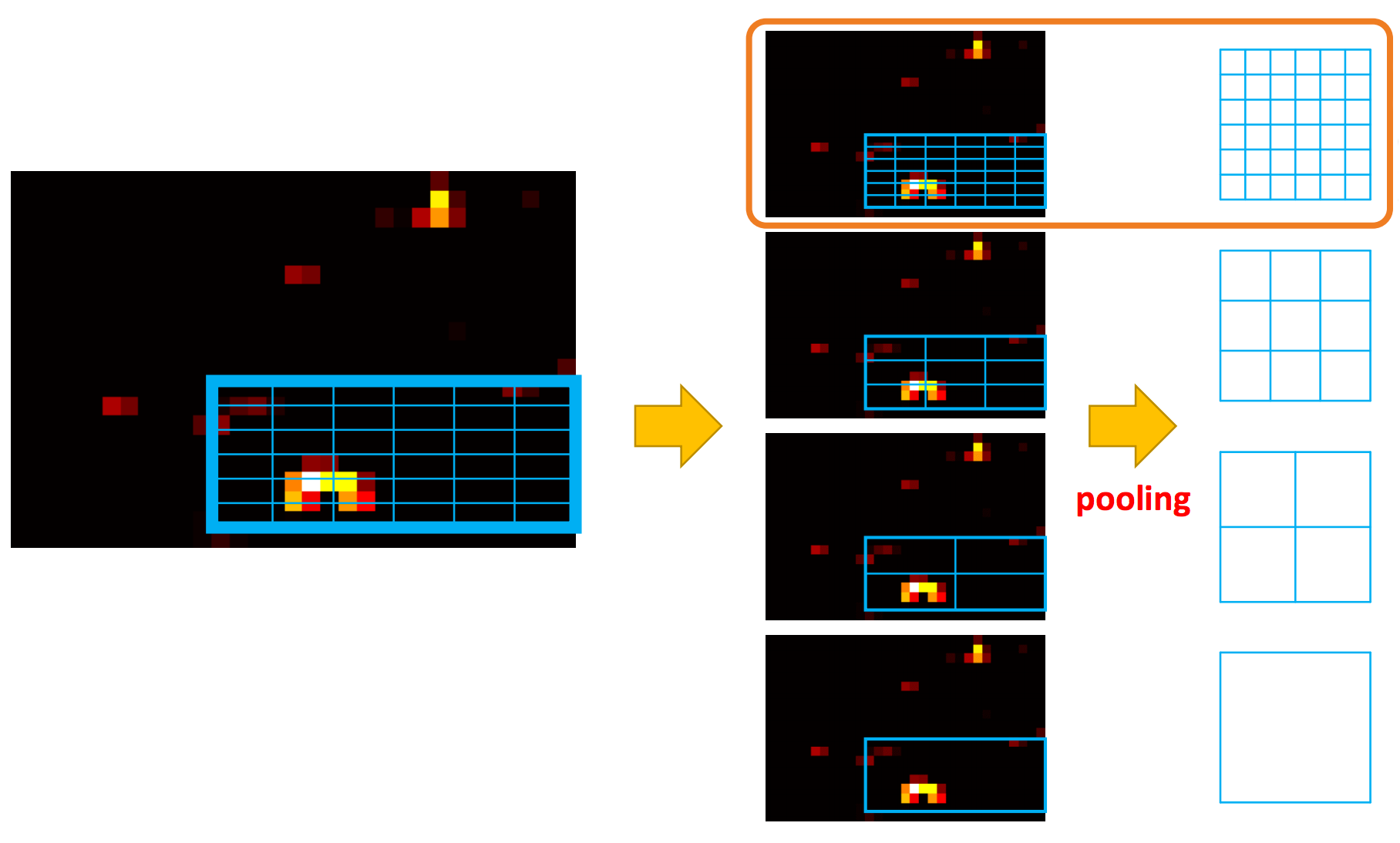 We pass it to a fully-connected network, and use a SVM for classification and a linear regressor for the bounding box. 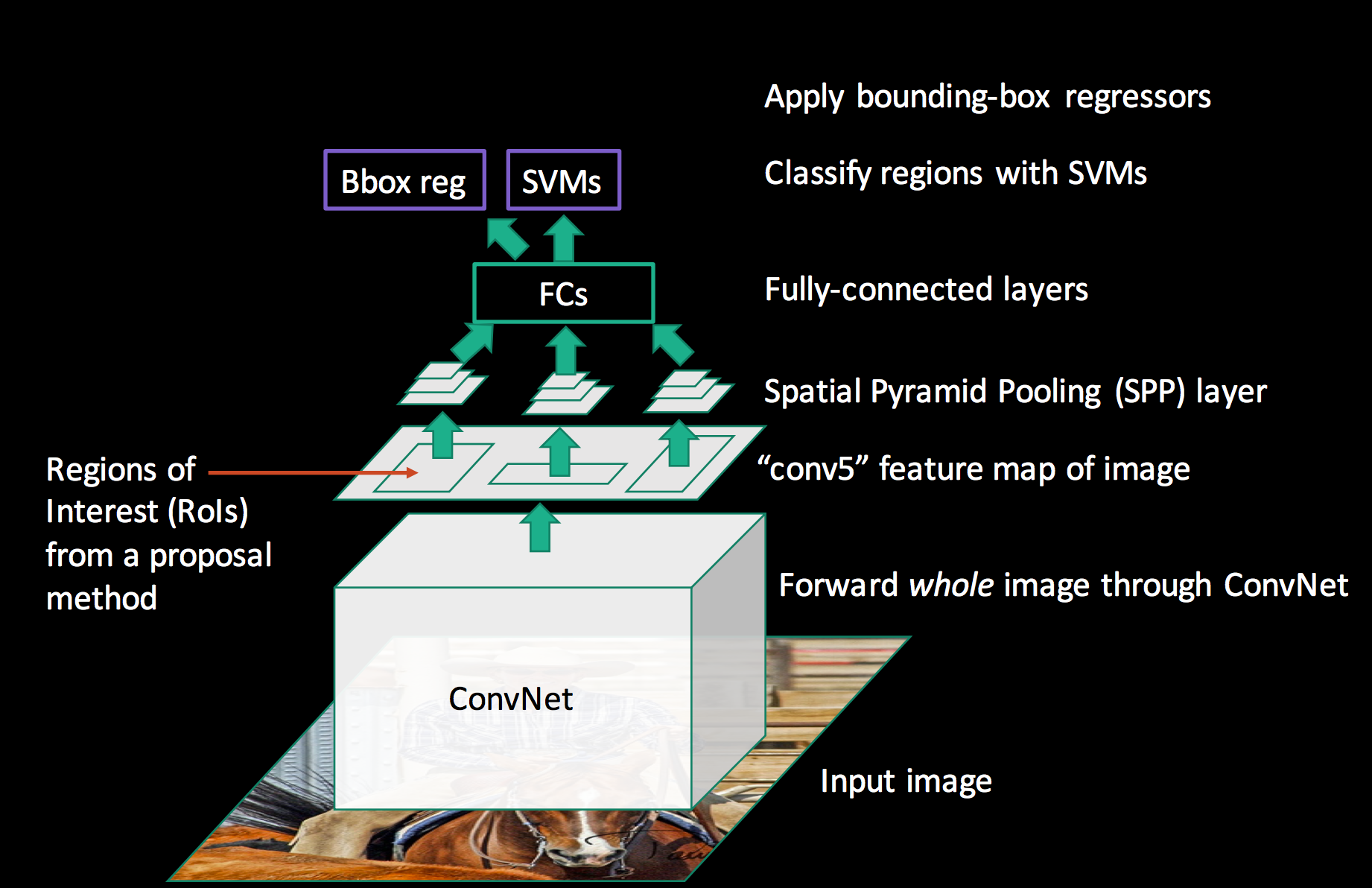 Instead of generating a pyramid of layers, Fast R-CNN warps ROIs into one single layer using the RoI pooling.

The RoI pooling layer uses max pooling to convert the features in a region of interest into a small feature map of H × W. Both H & W (e.g., 7 × 7) are tunable hyper-parameters.

You can consider Fast R-CNN is a special case of SPPNet. Instead of multiple layers, Fast R-CNN only use one layer. 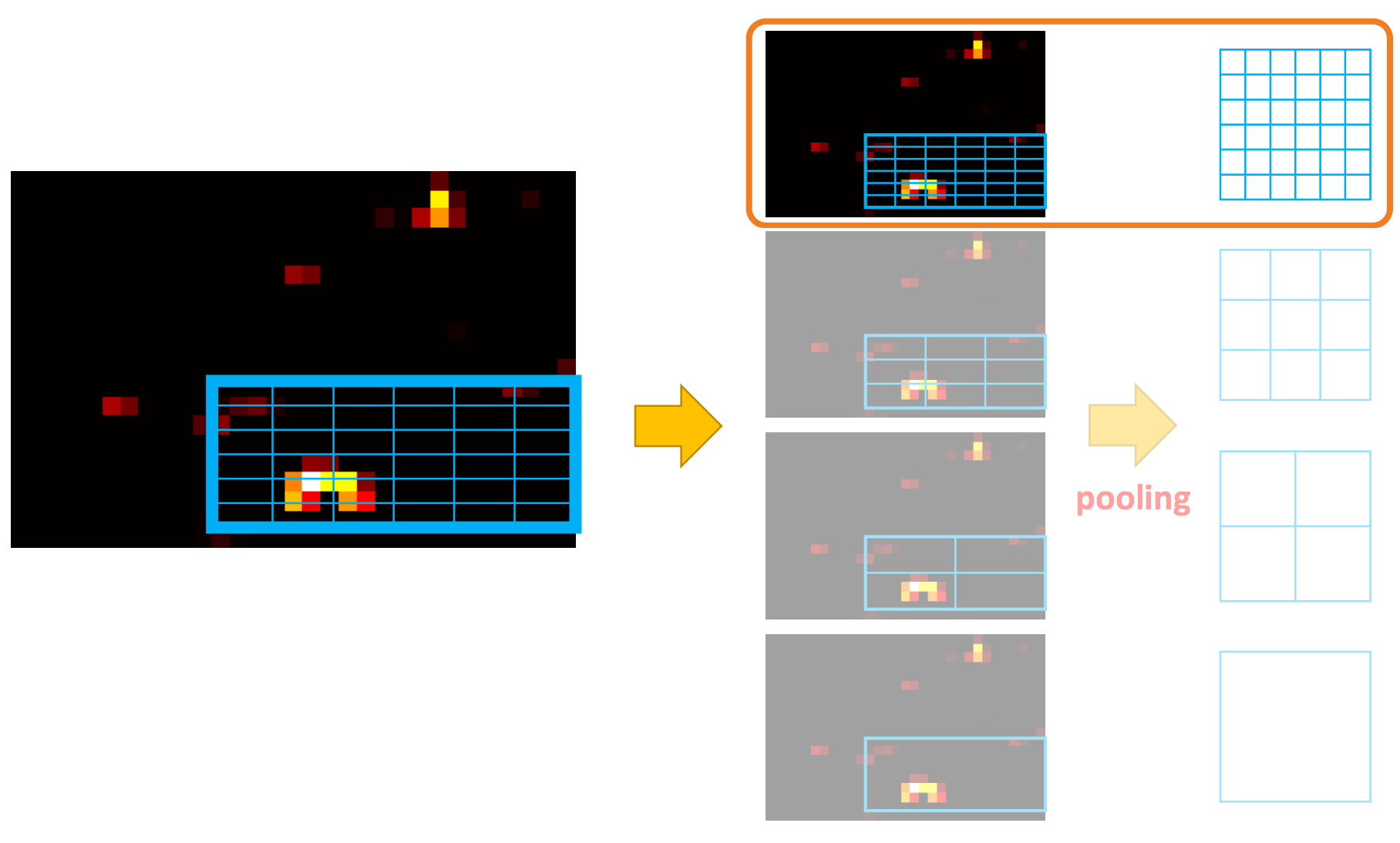 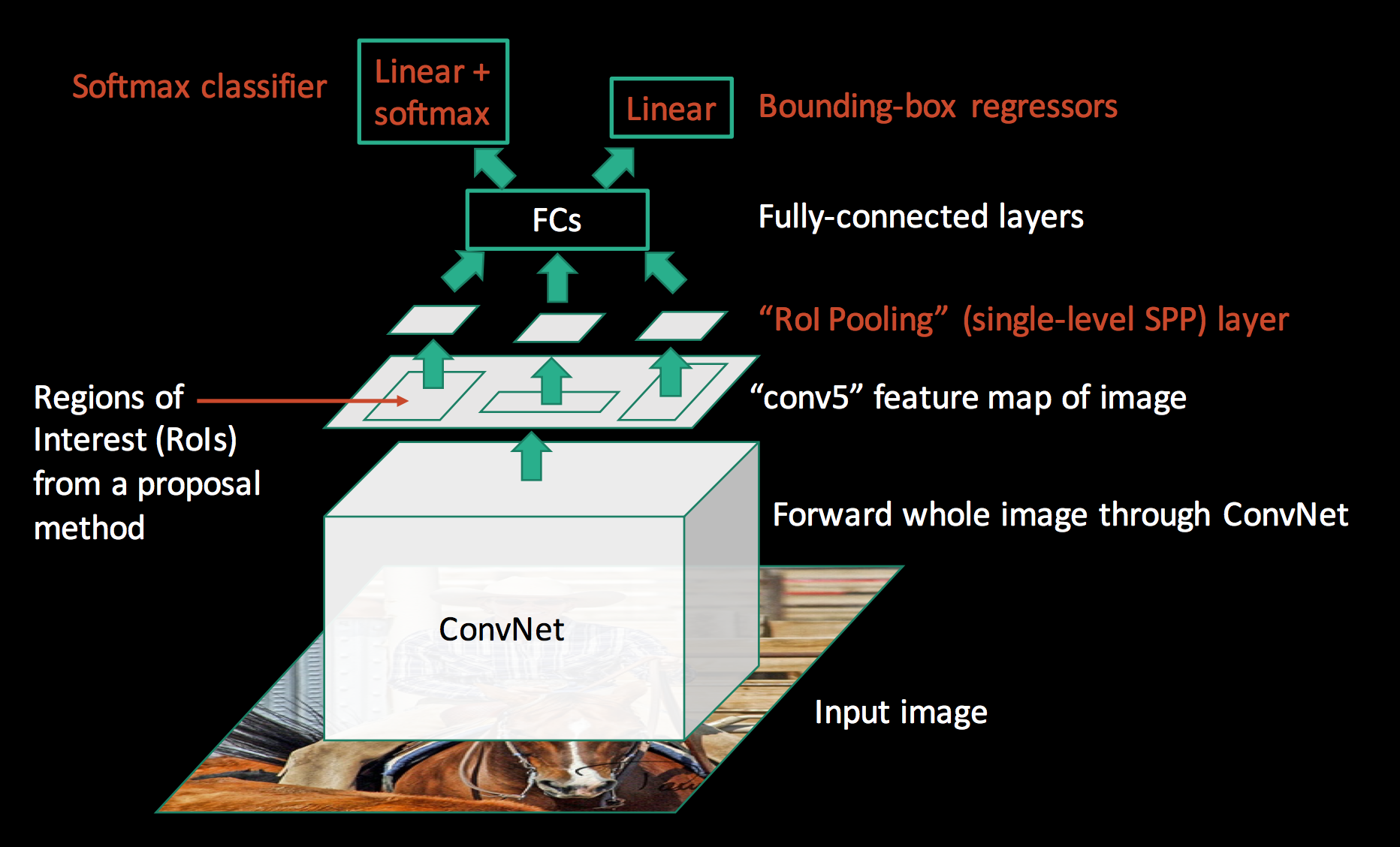 The key difference between SPPnet and Fast R-CNN is that SPPnet cannot update parameters below SPP layer during training: 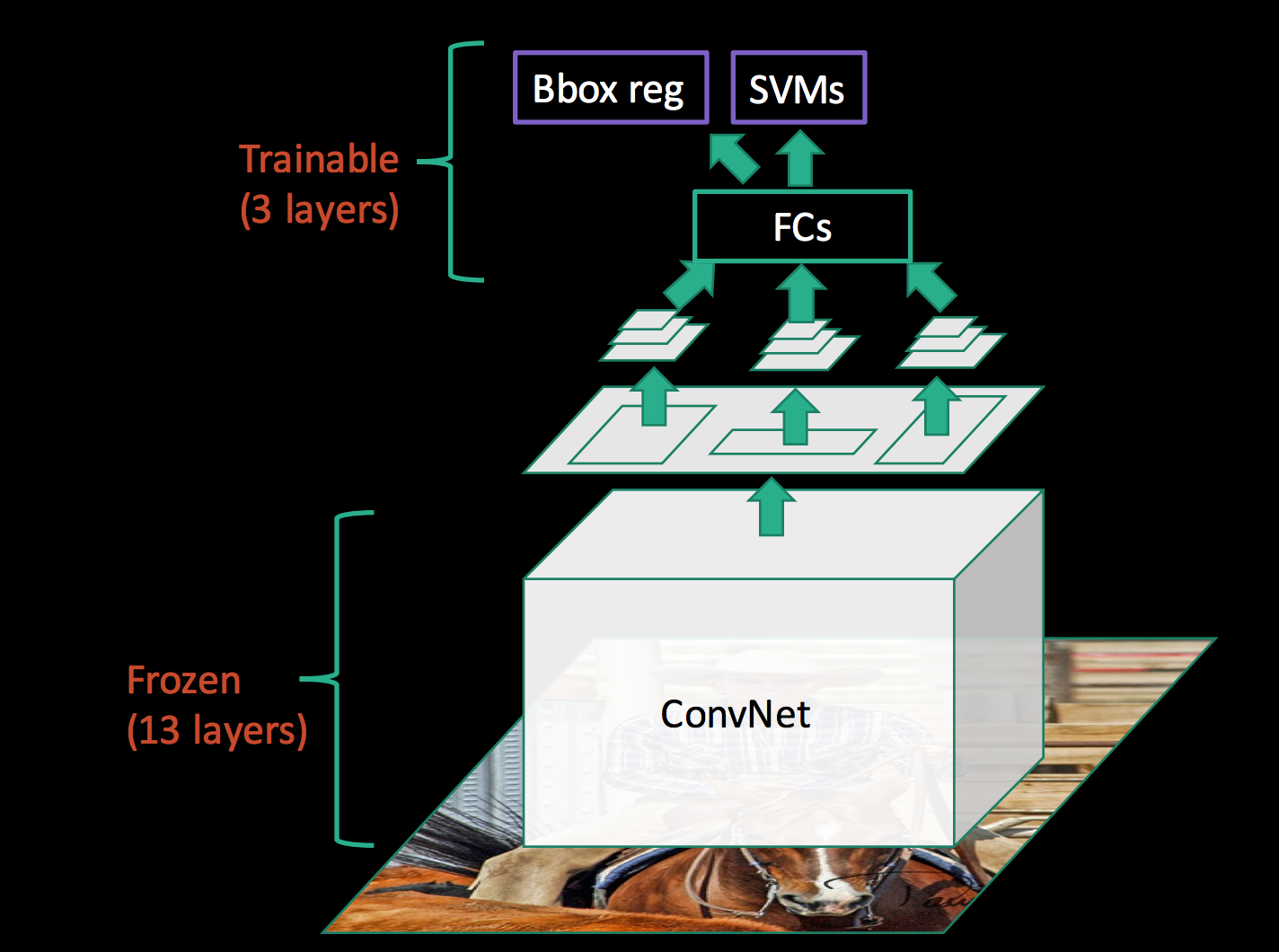 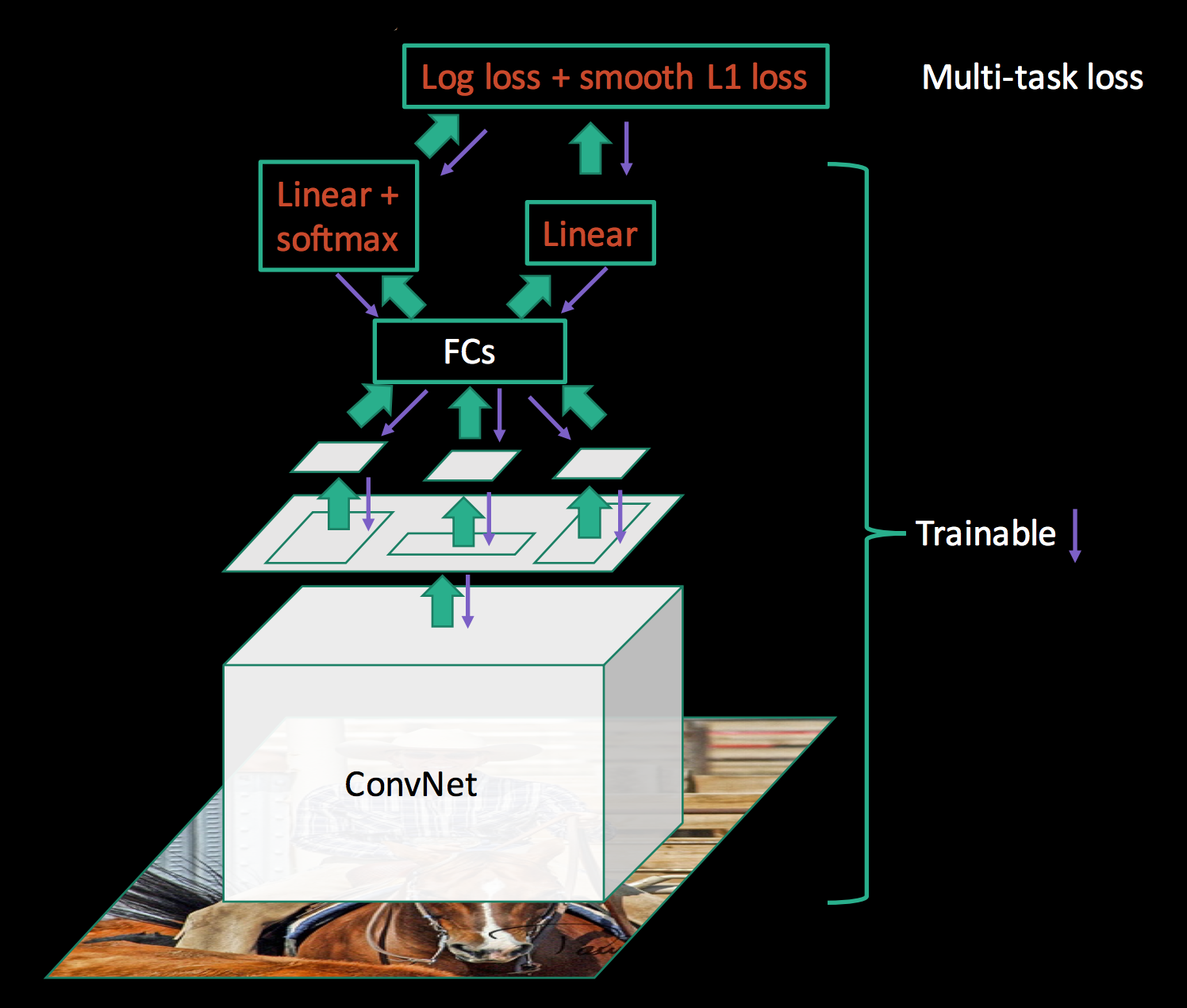 The information and some diagrams in this section are based on the paper Faster R-CNN: Towards Real-Time Object Detection with Region Proposal Networks, Shaoqing Ren etc al

Both SPPnet and Fast R-CNN requires a region proposal method. 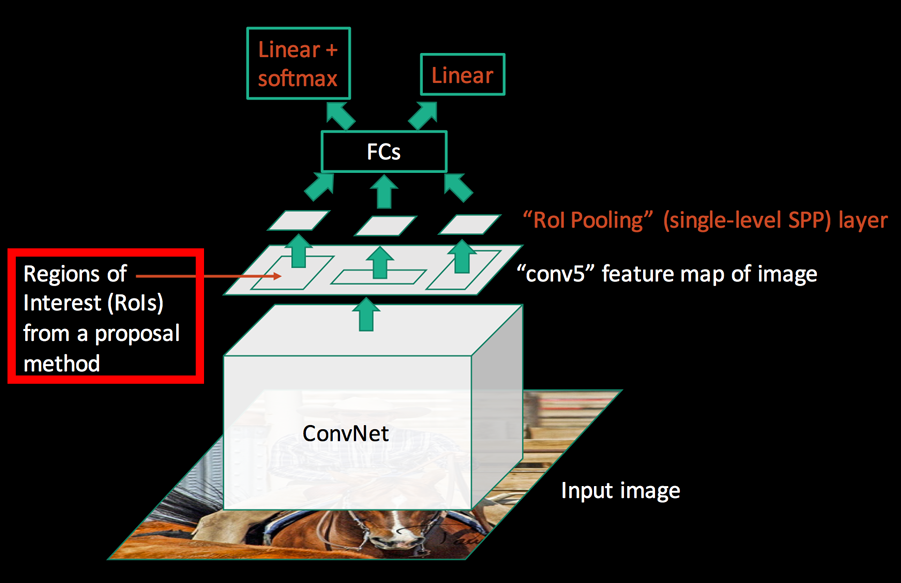 We then feed the region proposals to the RoI layer of the Fast R-CNN. 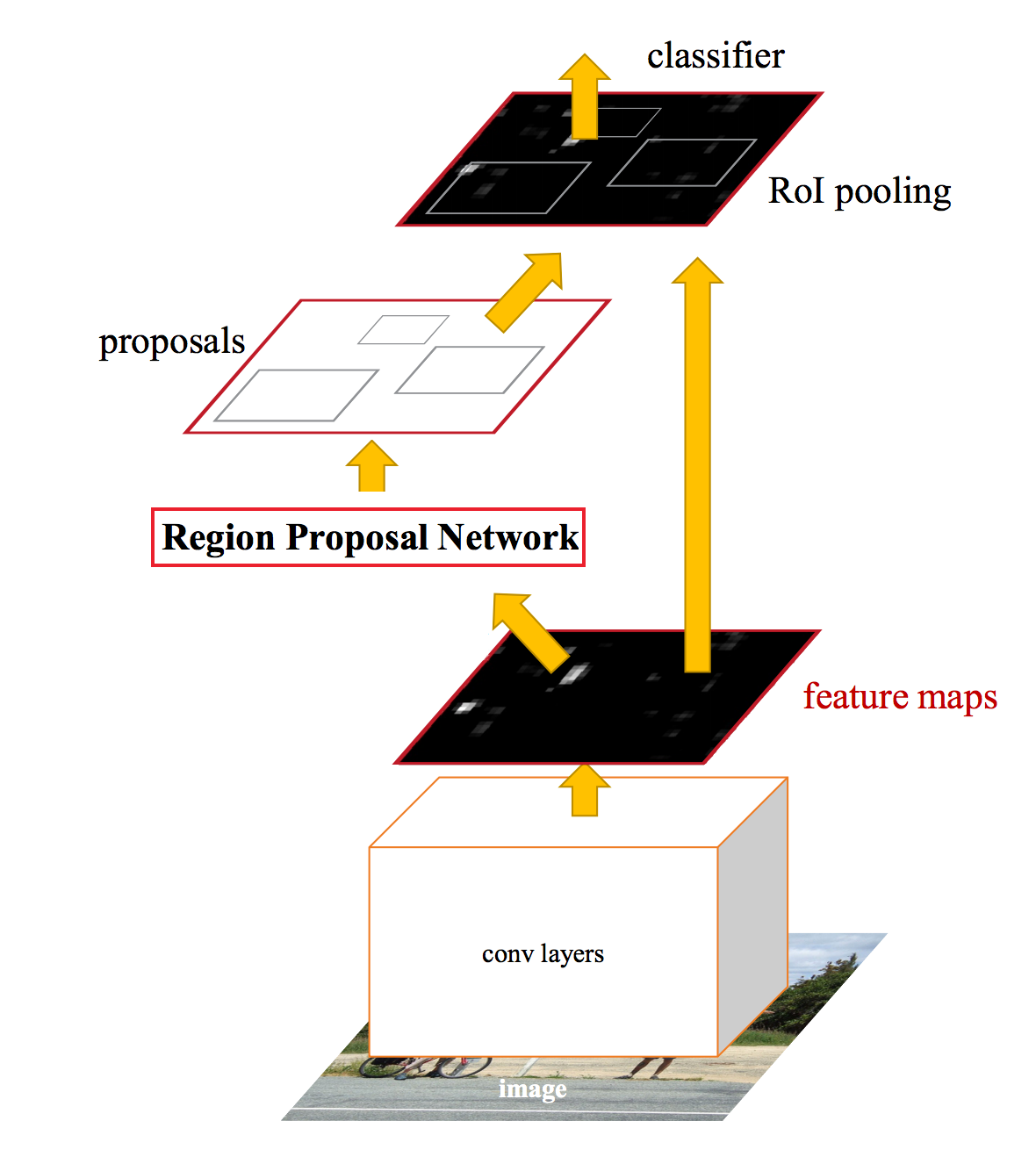 In the example above, we generate 1 proposal per sliding window. The region proposal network can scale or change the aspect ratio of the window to generate more proposals. In Faster R-CNN, 9 anchor boxes (on the right) are generated per anchor. 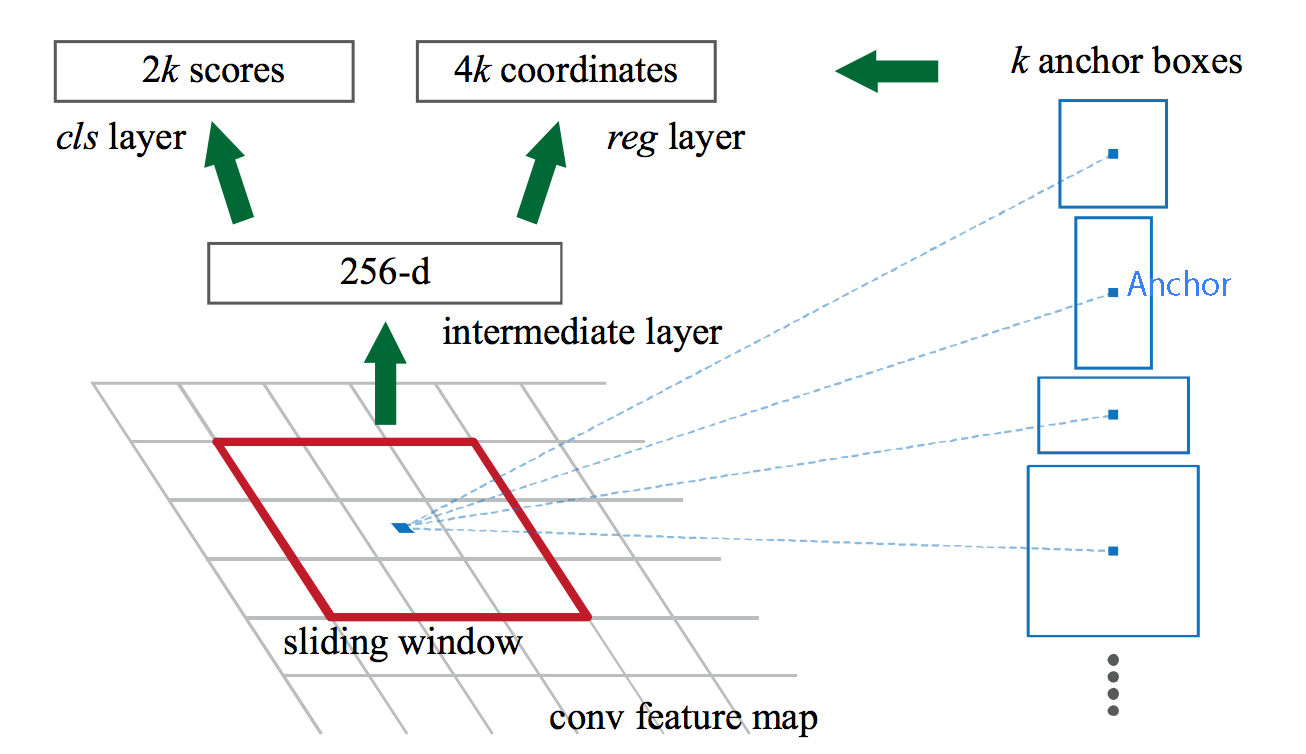 The implementations of Faster R-CNN can be found at: