Virtual assistances are pretty good at answering a one-line query but fail badly in carrying out a conversation. Here is a verbal exchange demonstrating the challenge ahead of us:

Why can’t the virtual assistance follow my instruction to book the Caffé Opera? It is because the virtual assistance does not remember our conversation and simply responses to our second query without the context of the previous conversation. Therefore, the best it can do is to find a restaurant that relates to the word “First”, and it finds a restaurant located on First Street. Memory networks address this issue by remembering information processed so far.

Consider the follow sequence with a query “Where is the milk now?”:

Storing information into the memory

First, we store all the sentences in the memory :

To answer a query , we locate the sentence that is most relevant to computed by a score function . Then we combine this sentence with to form a new query and locate the next highest score sentence . At last, we form another query . But we will not use it to query the next sentence. Instead, we query it with another score function to locate a word . Let’s walk through this with our example above.

To answer the query “where is the milk now?”, we compute our first inference based on:

where is a function that scores the match between an input and , and is the index to the memory with the best match. Here, is our best match in the first inference: “Joe left the milk.”

Then, we make a second inference based on

where will be “Joe traveled to the office.”.

We combine the query, and the inference results as :

To generate a final response from :

where is all the words in the dictionary, and is another function that scores the match between and a word . In our example, the final response is the word “office”.

We use bags of words to represent our input text. First, we start with a vocabulary of a size .

To encode the query “where is the milk now” with bags of words:

: Where is the milk now?

: Joe travelled to the office.

To encode above, we use:

Hence, each sentence is converted to a bag of words of size .

which embedding and are trained with a margin loss function, and converts the sentence into a bag of words.

We will train the parameters in and with the marginal loss function:

For a system with huge memory, computing every score for each memory entry is expensive. Alternatively, after computing the word embedding , we apply K-clustering to divide the word embedding space into K clusters. We map each input into its corresponding cluster and perform inference within that cluster space only instead of the whole memory space.

The description, as well as the diagrams, on the end to end memory networks (MemN2N) are based on End-To-End Memory Networks, Sainbayar Sukhbaatar etc.

We start with a query “where is the milk now?”. It is encoded with bags of words using a vector of size . (which is the size of the vocabulary.) In the simplest case, we use Embedding () to convert the vector to a word embedding of size d.

For each memory entry , we use another Embedding () to convert it to of size d.

The match between and each memory is computed by taking the inner product followed by a softmax:

We use a third Embedding to encode as

The output is computed as:

We multiply the sum of and with matrix W (). The result is passed to a softmax function to predict the final answer. 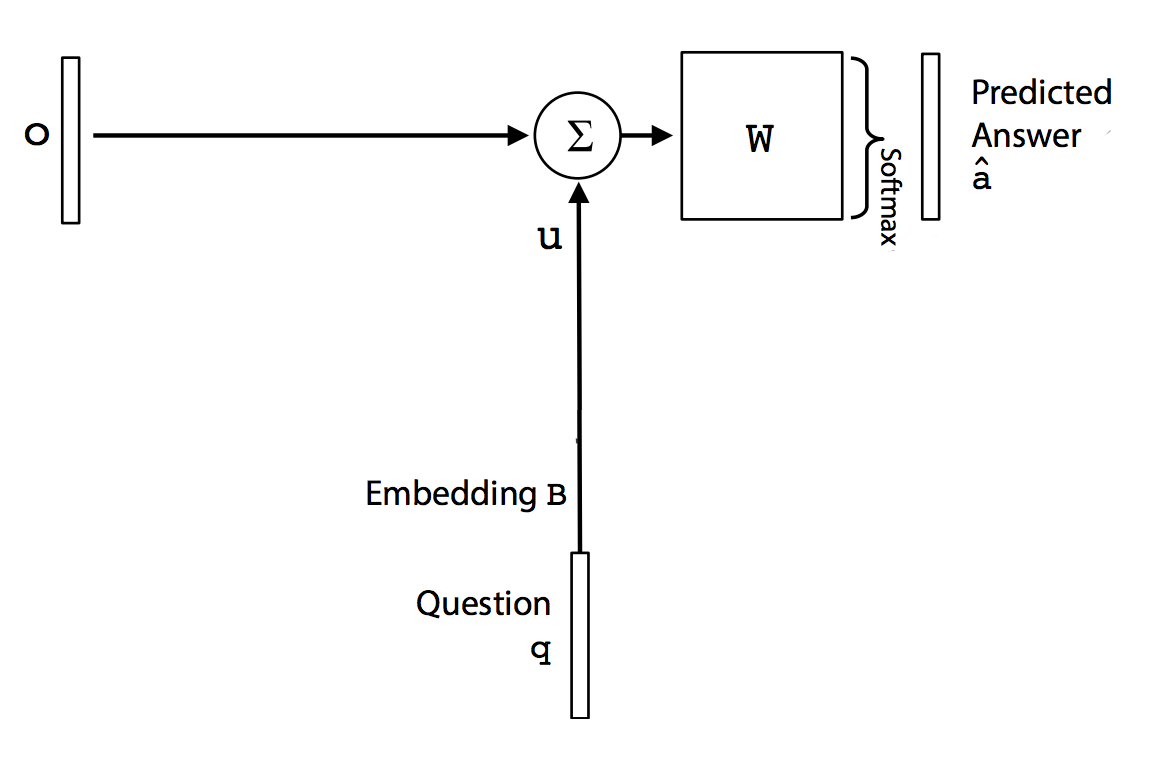 Here, we combine all the steps into one diagram: 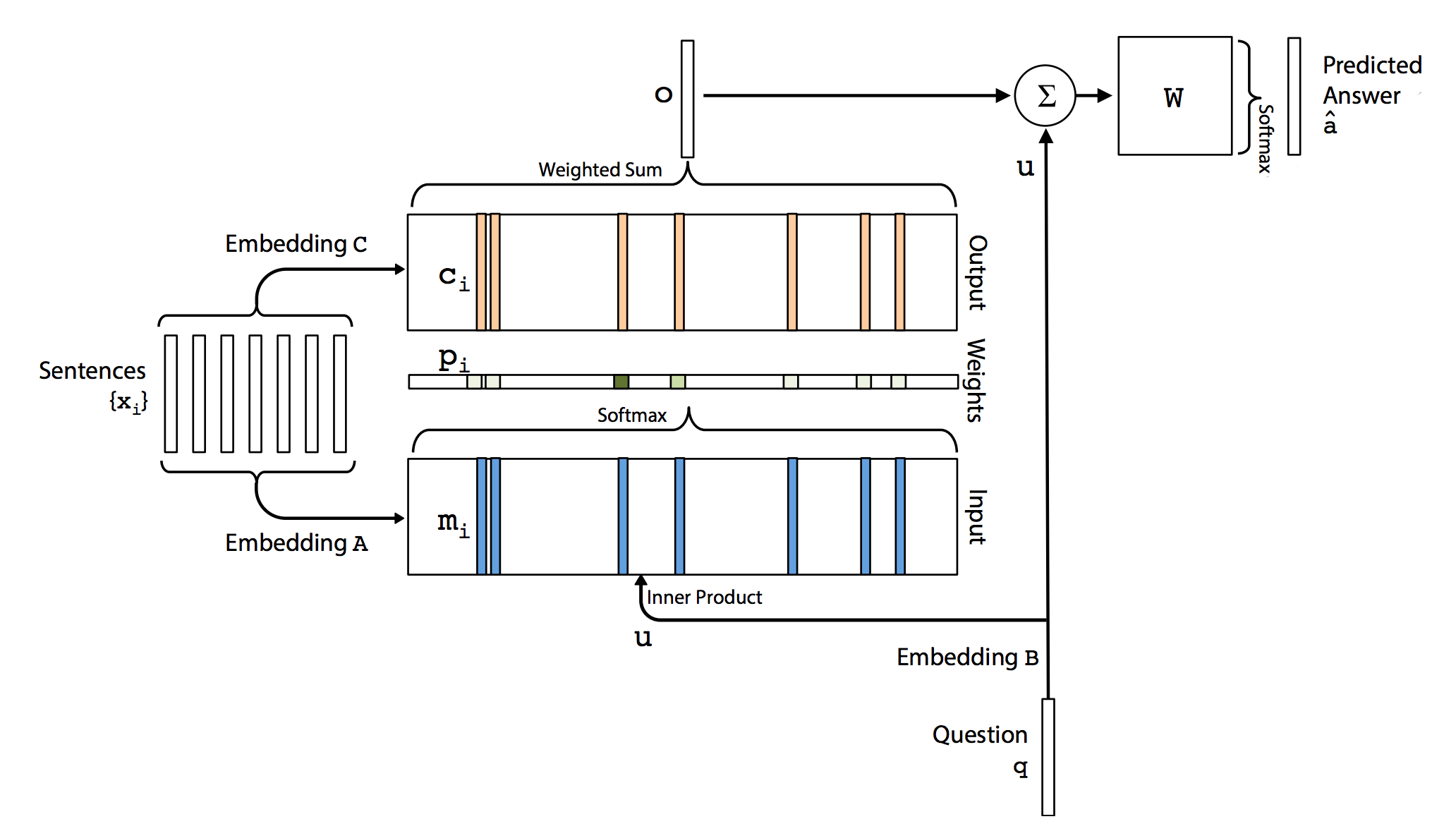 Similar to RNN, we can stack multiple layers to form a complex network. At each layer , it has its own embedding and embedding . The input at layer is computed by: 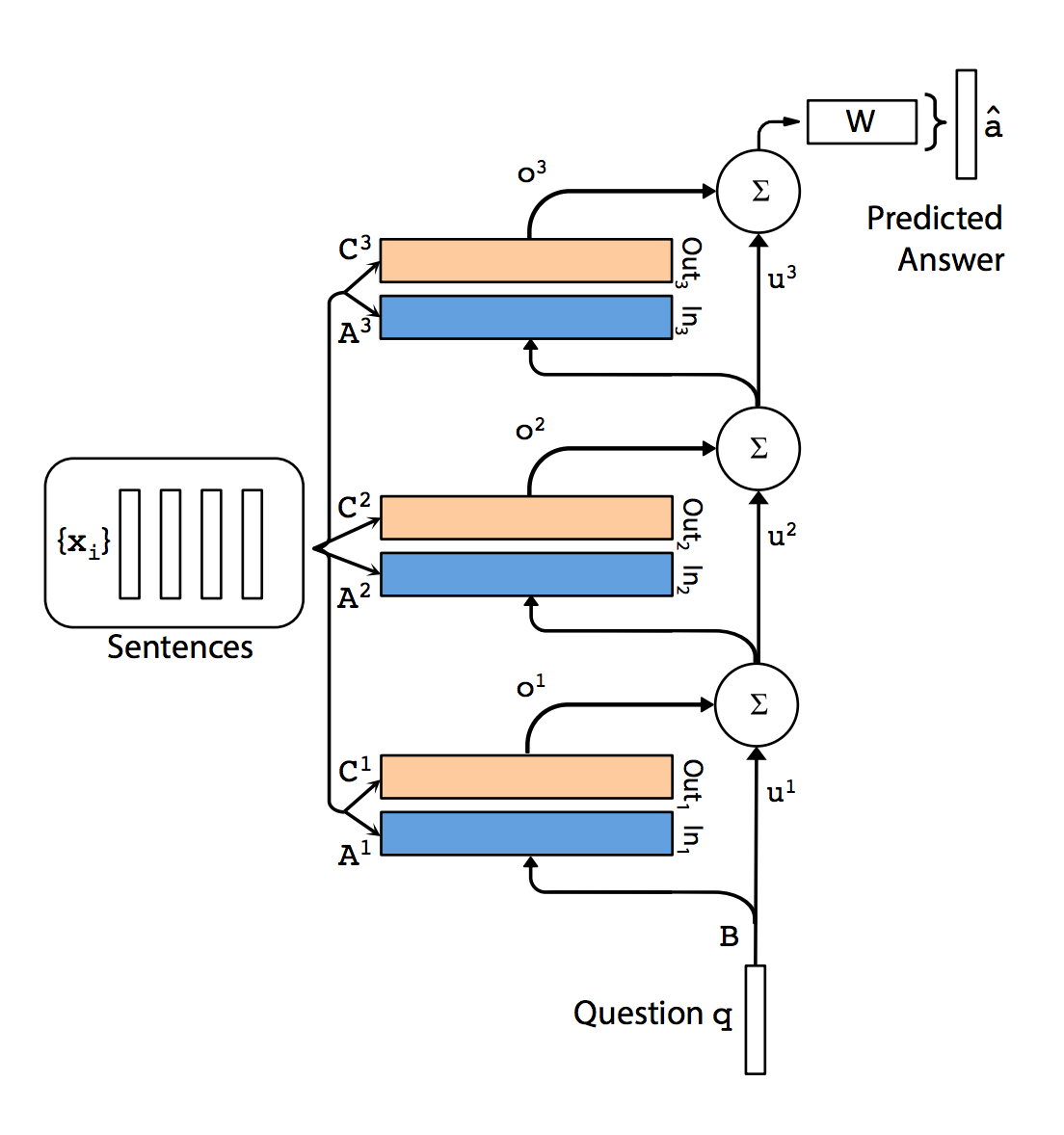 We can use MemN2N as a language model. For example, we parse the document “Declaration of Independence”: “We hold these truths to be self-evident, that all men are created equal, that they are endowed by their Creator with certain unalienable Rights, that among these are Life, Liberty and the pursuit of Happiness.” Instead of 1 sentence per memory entry, we store only one word per entry as follows:

The purpose of the language model is to predict say the word 7 “self-evident” above.

Changes are made according to sections described in the MemN2N paper.

Compute the cost and building the optimizer with gradient clipping

The initialization code and creating placeholder:

The full source code is in github with original code based on https://github.com/carpedm20/MemN2N-tensorflow.

Sentence is processed by a GRU which the last hidden state is used for the memory module.

is the gate control on what new information is added to . It is open if it is relevant to the question or memory . We first form a new feature set by concatenating:

The gate is computed as:

After is computed, the relevant facts are summarized in another GRU. If the summary is not sufficient to answer the question, we move to in the memory module.