In deep learning, we model h in a fully connected network as: 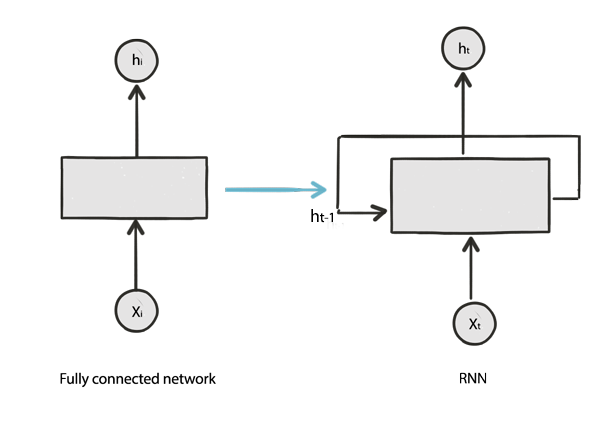 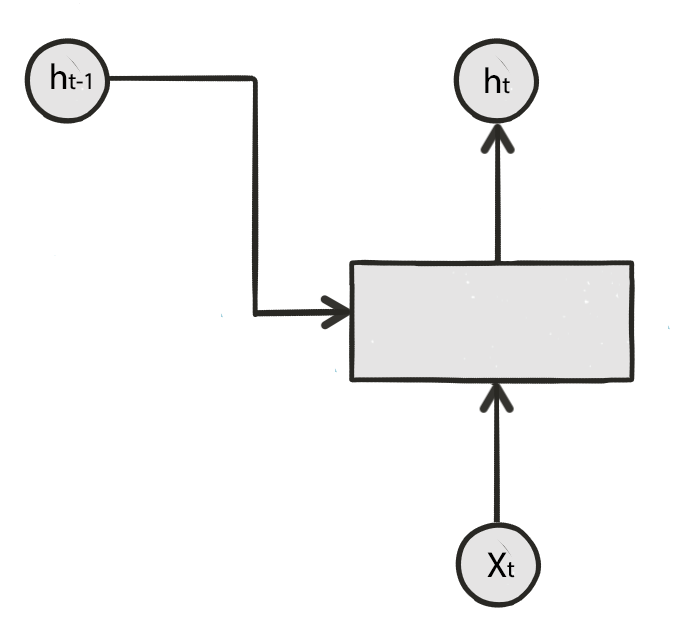 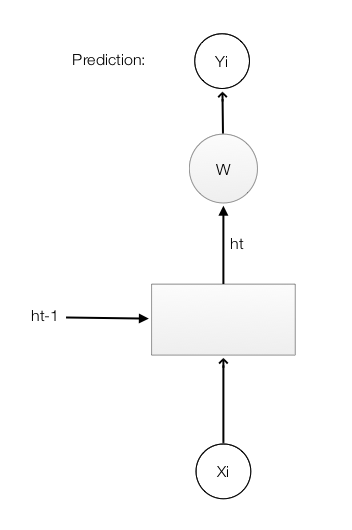 RNN makes prediction based on the hidden state in the previous timestep and current input. \(h_t = f(x_t, h_{t-1})\)

Let’s study a real example to study RNN in details. We want our system to automatically provide captions by simply reading an image. For example, we input a school bus image into a RNN and the RNN produces a caption like “A yellow school bus idles near a park.”

During the RNN training, we 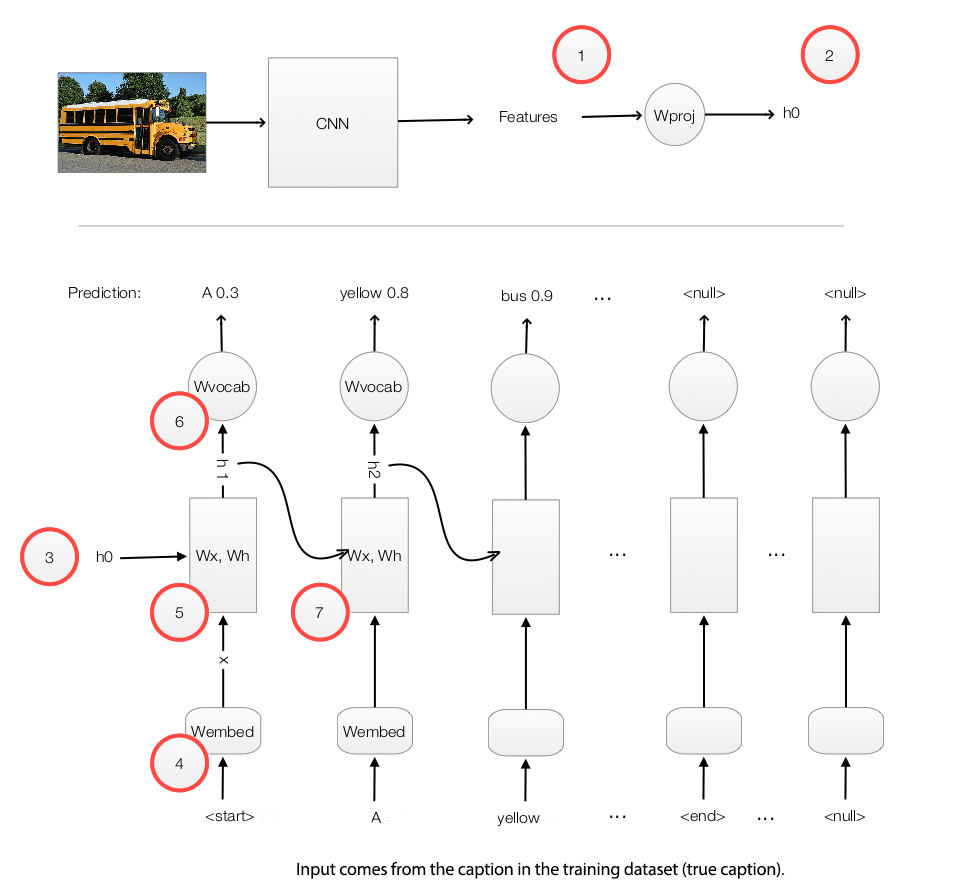 We pass the image into a CNN and use one of the activation layer in the fully connected (FC) network to initialize the RNN. For example, in the picture below, we pick the input of the second FC layer to compute the initial state of the RNN \(h_0\).

We multiply the CNN image features with a trainable matrix to compute \(h_0\) for the first time step 1.

We use a CNN to extract image features. Multiple it with a trainable matrix for the initial hidden state \(h_0\).

Define a matrix to project the CNN image features to \(h_0\).

Our training data contains both the images and captions (the true labels). It also has a dictionary which maps a vocabulary word to an integer index. Caption words in the dataset are stored as word indexes using the dictionary. For example, the caption “A yellow school bus idles near a park.” can be represented as “1 5 3401 3461 78 5634 87 5 111 2” which 1 represents the “start” of a caption, 5 represents ‘a’, 3401 represents ‘yellow’, … and 2 represents the “end” of a caption.

The RNN does not use the word index. The word index does not contain information about the semantic relationship between words. We map a word to a higher dimensional space such that we can encode semantic relationship between words. For example, if we encode the word “father” as (0.2, 0.3, 0.1, …) we should expect the word “mother” to be close by say (0.3, 0.3, 0.1, …). The vector distance between the word “Paris” and “France” should be similar to the one between “Seoul” and “Korea”. The encoding method word2vec provides a mechanism to convert a word to a higher dimensional space. We use a word embedding lookup table \(W_{embed}\) to convert a word index to a vector of length wordvec_dim. This embedding table is trained together with the caption creating network instead of training them independently (end-to-end training).

We train the word embedding table together with the caption creation network. 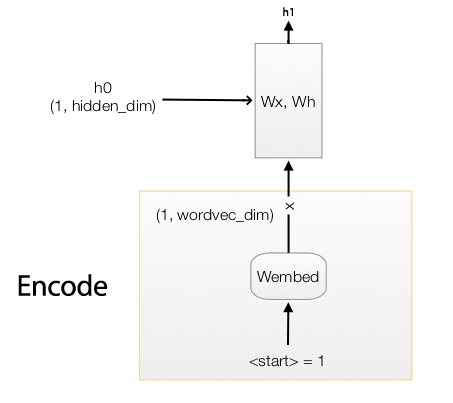 word2vec encodes words to higher dimensional space that provides semantic relationships that we can manipulate as vectors.

When we create the training data, we encodes words to the corresponding word index using a vocabulary dictionary. The encoded data will then be saved. During training, we read the saved dataset and use word2vec to convert the word index to a word vector. 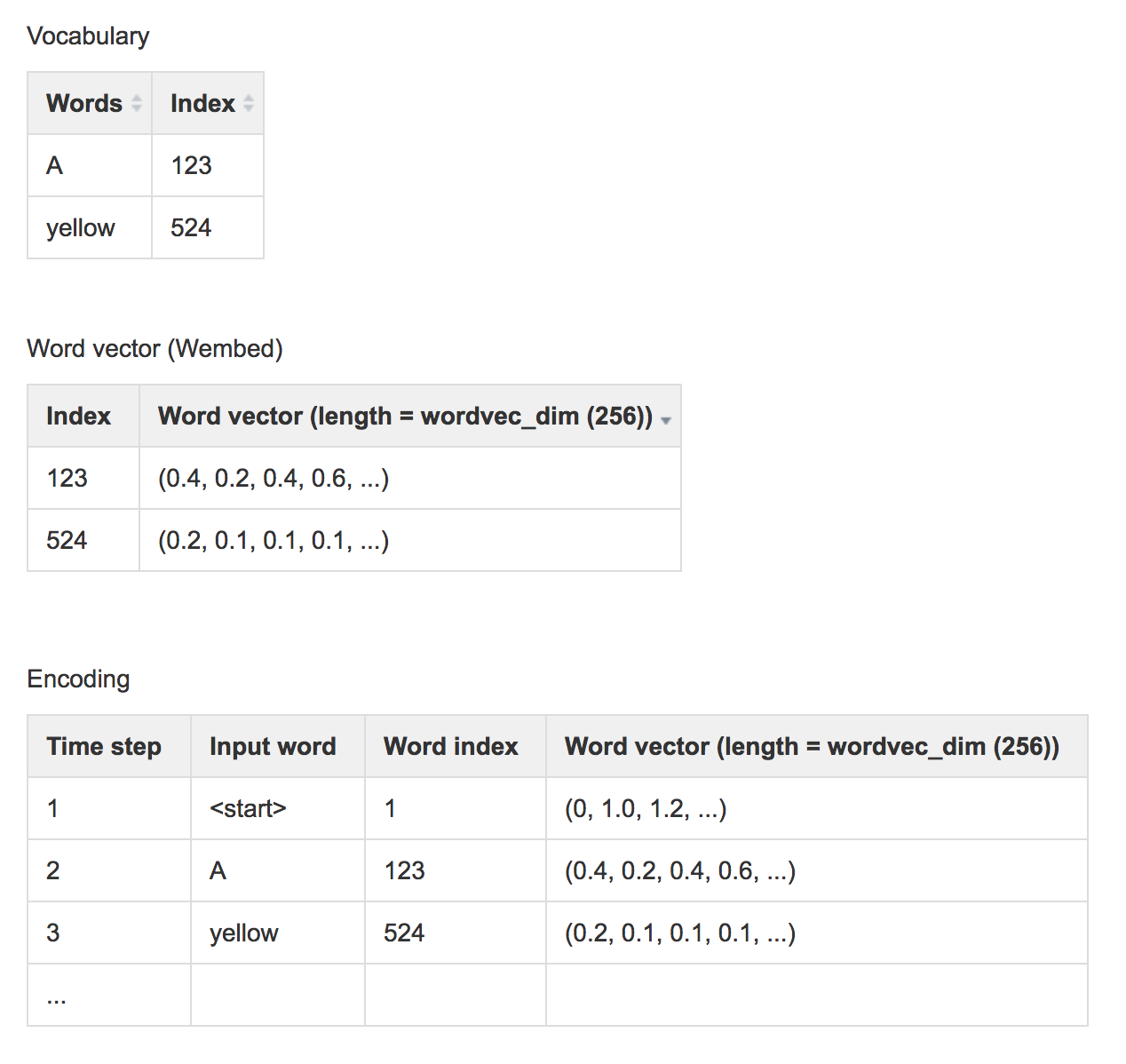 Here is the code to convert an input caption word to the word vector x.

Randomly initialize W which we will train it with the RNN together. 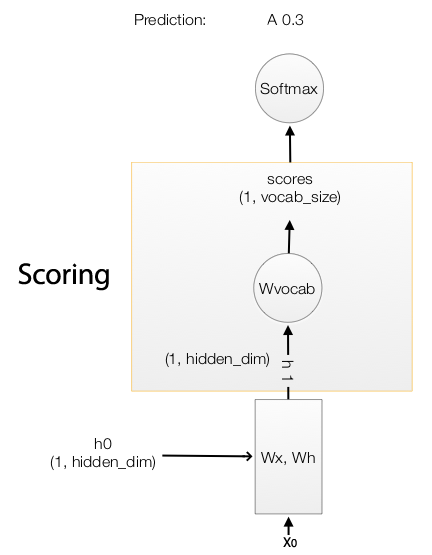 The output of the RNN \(h_1\) is then multiply with \(W_{vocab}\) to generate scores for each word in the vocabulary. For example, if we have 10004 words in the vocabulary, it generates 10004 scores predicting the likeliness of each word to be the next word in the caption. With the true caption in the training dataset and the scores computed, we calculate the softmax loss of the RNN. We apply gradient descent to optimize the trainable parameters. 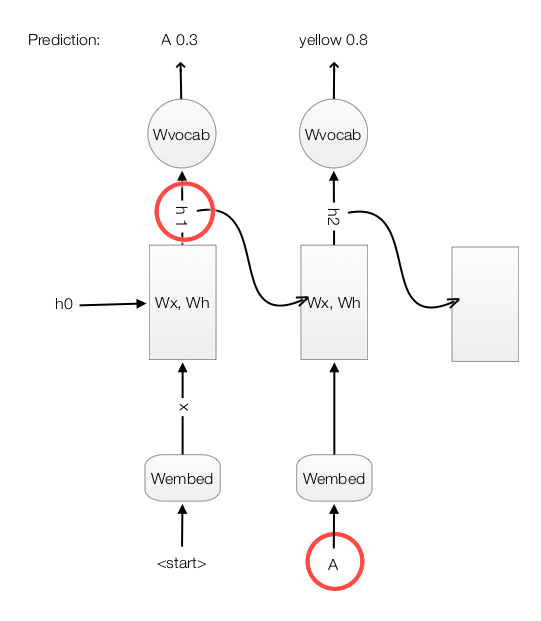 rnn_forward unroll the RNN by T time steps and compute \(h_t\) by calling the RNN cell “rnn_step_forward”. At each step, it takes \(h_{t-1}\) from the previous step and use the true captions provided by the training set to lookup \(X_t\). Note, we use the true label instead of the highest score word from previous time step as input.

In each RNN time step, we compute:

After finding \(h_t\), we compute the scores by:

We compute score to locate the next most likely caption word.

For each word in the vocabulary (1004 words), we predict their probabilities of being the next caption word using softmax. Without changing the result, we subtract it with the maximum score for better numeric stability.

We then compute the softmax loss (negative log likelihood) and the gradient.

Here, we recap how we calculate \(h_0\) from the image features and use the true caption “start” to make a prediction \(h_1\) from the RNN. Then we compute the scores and the softmax loss. 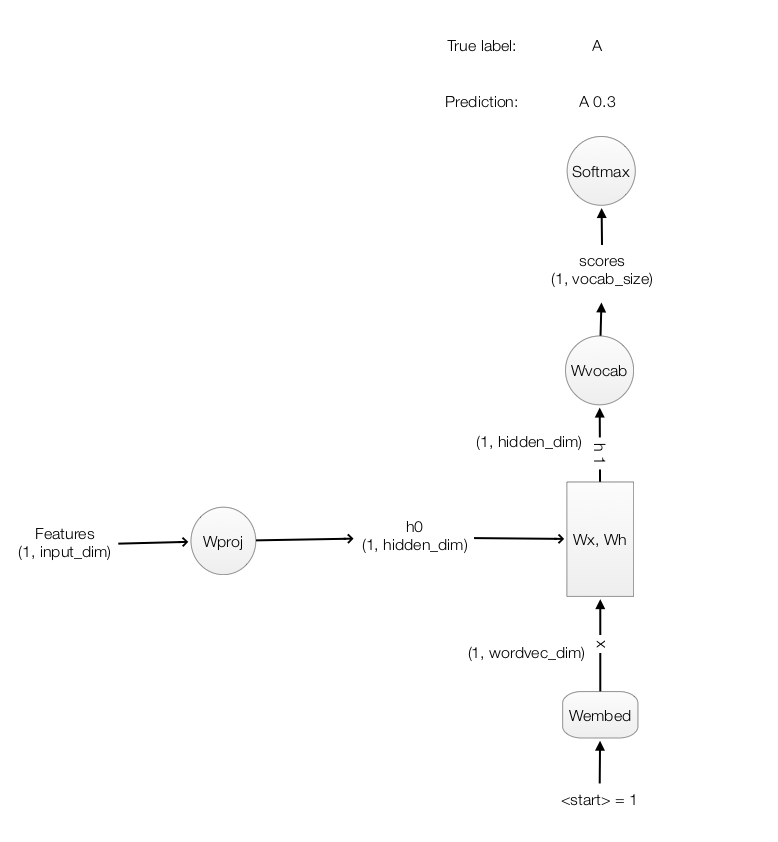 Code listing for the forward feed, backpropagation and the loss.

Use softmax cost to train the network.

To generate captions automatically, we will use the CNN to generate image features and map it to \(h_0\) with \(W_{proj}\).

At time step 1, we feed the RNN with the input “start” to get the word vector \(X_1\). The RNN computes the value \(h_1\) which later multiplies with \(W_{vocab}\) to generate scores for each word in the vocabulary. We select the word with the highest score for the first word in the caption (say, “A”). Unlikely training, we use this word as the next time step input. With \(h_1\) and the highest score word “A” in time step 1, we go through the RNN step again and made the second prediction “bus” at time step 2. 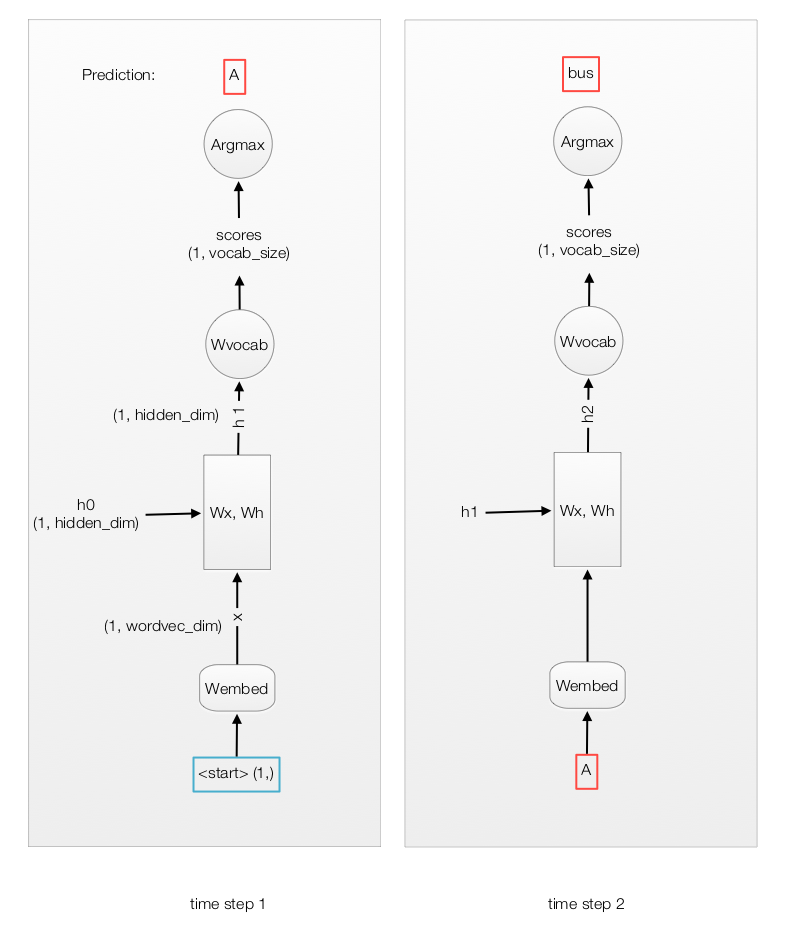 We compute the score and set the input for the next time step to be the word with the highest score.

Here is the full code making the prediction with comments: 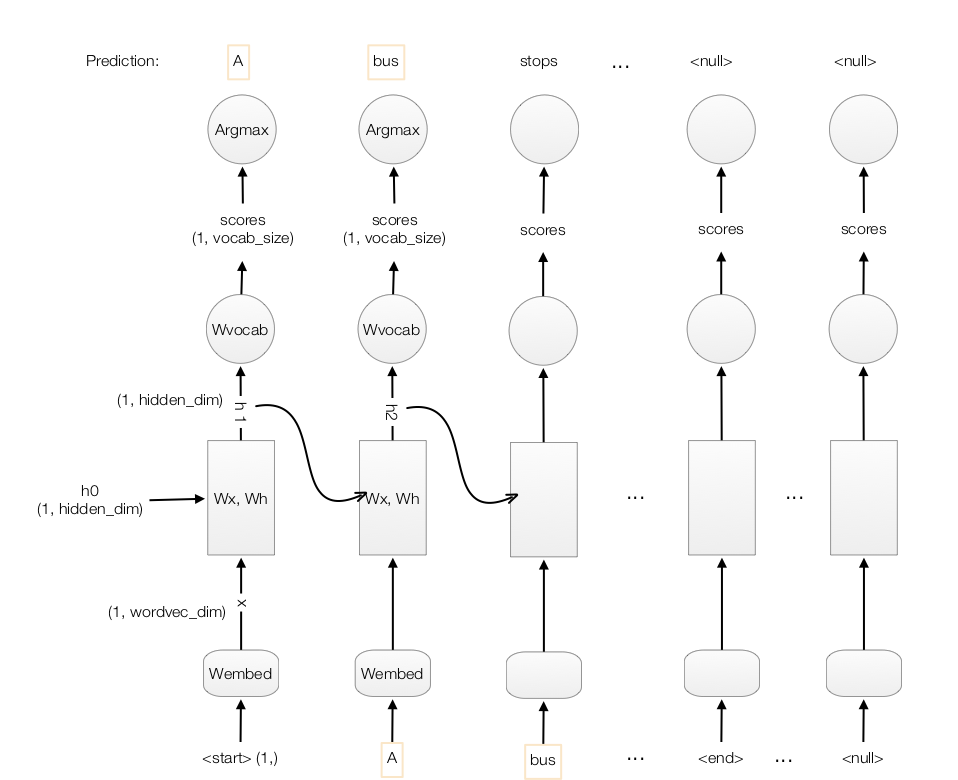 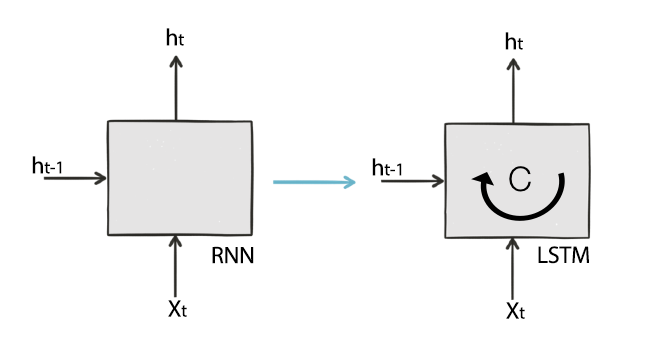 Here are the LSTM equations:

There are 3 gates controlling what information will pass through:

3 equations to update the cell state and the hidden state:

The key part in LSTM is to update the cell state \(C\). 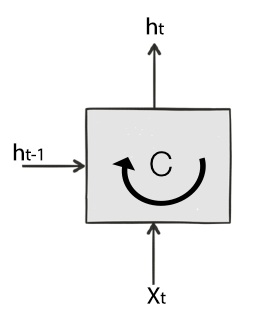 The new state \(C_t\) is form by forgetting part of the previous cell state while add part of the new proposal \(\tilde{C}\) to the cell state: 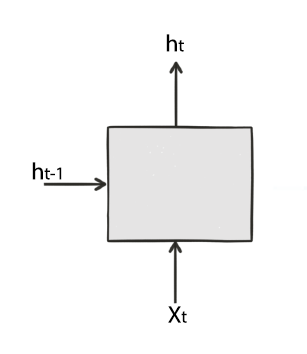 Now we change our previous code and swap the RNN out with a LSTM.

lstm_forward looks similar to the RNN with the exception that it track both \(h\) and \(C\) now.

One of the reason that we do not sub-index W and b is that we can concatenate all W and b into one big matrix and apply the matrix multiplication at once. The following code compute 3 different gates and then compute \(\tilde{C}\), \(C\) and \(h\) .

LSTM composes of the Cell state and Hidden state. We use 3 gates to control what information will be passed through. We calculate new cell state by keep part of the original while adding new information. Then we expose part of the \(C_t\) as \(h_t\).

Compare with LSTM, GRU does not maintain a cell state \(C\) and use 2 gates instead of 3.

The new hidden state is compute as:

For the RNN/LSTM case study, we use the image caption assignment (assignment 3) in the Stanford class “CS231n Convolutional Neural Networks for Visual Recognition”. We start with the skeleton codes provided by the assignment and put it into our code to complete the assignment code.